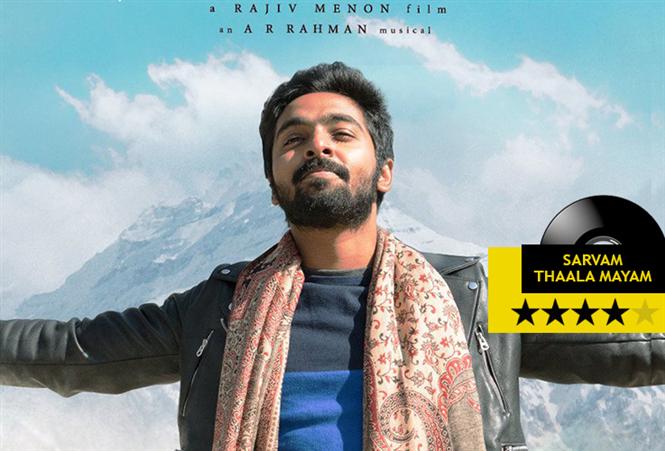 Rajiv Menon after 18 years.. comes back to tell a story. That's one good news. For how he owns a special space in my list of favorite directors.. just with two films! The way he stages a drama.. how he blends in tradition with modernity.. there is all that to look forward to! But what's even more exciting is the duo, Rajiv and Rahman, coming up again with a soundtrack. And this time, with a subject that's all about rhythm and music itself. Can it get anymore exciting? Yes! I do feel for them missing out an iconic addition they made magic with.. Vairamuthu! Especially after all those stellar classics! Still.. here is an album that sounds and stands fresh on its own merit!

Sarvam Thaala Mayam : The heavy guitar hook that opens the song is wildly followed by the percussions and beats. Haricharan's rendition is heartening. With Arjun Chandy joining him in the 'Sarvam Thaala Mayam' chorus.. the very mood of the song becomes soul liberating. The commotion of different instruments paneling beneath each line is quite something. Karky's lyrics has done its job neat and fair enough. Yet you badly wish for what a veteran like Vairamuthu would have knocked out of a concept like this. The song towards the end blows a heavy folkbeat which though may sound quite drastic a shift in the audio.. let us wait to know what the magicians have done with it in the film!

Maya Maya : This number is such a mood piece. This could be the 'Kandukonden Kandukonden' equivalent of this album! The song reminds you of the late 90s or the early 2000s Rahman who would make a melody that would just honeyously flows over the listener. 'Oh Vennilaa..' of Kaadhal Desam or a 'Nenje Nenje' in Ratchagan flashes within you as you hear it. The melody is serenely caressed by Chinmayi's rendition. Na.Muthukumar's midas spell comes all over. Be it a phrase like 'Un madiyil.. Oru pon nodiyil..' that so effortlessly fits in the meter or a lyrically rich line like 'Idhayathil oru paravai.. virikkudhu adhan siragai.. Siragalla adhu siluvai! Uyirpera kodu uravai!' is something for the contemporary lyricists to look upto!

Peter Beatu Yethu : What initially sounded like a misfit for a Rajiv Menon - ARRahman album.. later turned into an interesting track with the way it's been sung and arranged. It really hooks to you. Sung by G.V.Prakash along with SathyaPrakash and Arjun Chandy, the foot-tapping number has slowly grown over me. Meant to be a song about the character's obsession over a star he is a fan of.. the lyrics are full-on colloquial ('Patrolae vandhaa kooda scenea poduvom') and have been successfully kept closer to mainstream josh except for one moment when a line that's meant to be 'Thaerupola theruvil naanga petti thookkuvom' coming off as 'vaetti thookkuvom' by the singer's rendition. Also.. this is one of those rarest of rare times when I get reminded of Ilayaraja while listening to a track of Rahman. The song oddly resembles you a lot of 'Pudikkala Maamu' from Needhaane En Ponvasantham (particularly, the second charanam of the song that jumps into a funky folkbeat). But.. the number, much like 'Aalaporaan Tamizhan'.. deserves a theatrical experience to enjoy the full-on-craziness it is.

Varalaamaa? : Composed by Rajiv Menon himself, this classical piece stays as the lifeline of the film's theme. The song explores a Sishya's yearning to be noticed by his Guru. Karky's lyrics are beautifully conversational. A line like 'Thirumbaayo en thisaiyil? Nee asaivaayo en isaiyil?' comes like a stroke of sheer beauty with the amount of polluted lyrics we been dumped up with in recent times. Also secretly hoping for a national recognition for the stunningly divine rendition by Sriram Parthasarathy. Look at the range he takes the song to towards the second charanam! The moment he lists out all the things that stays within one another to sprout out till the right time comes.. ('Vidhaiyinul virutchamaai..', 'Sollinul porulaai..', 'Mazhalaikkul amizhdhamaai..', 'Kallinul silaiyaai..', 'Anuvinul agilamaai..') and lands on 'Enakkulle isaiyaai..'. It is what BLISS is!

Dingu Dongu : The number sung by Bamba Bakya and Anthony Dasan evokes a pain of oppression. The song talks of what 'Paadariyen' did in Sindhu Bairavi. It claims for the equality in music scenario. The rioting aggression of rage in the rhythm is fiery. The hook of the track 'Dingu Dongu' that caught up with us in the teaser sounds even more terrific in the flow.

Maakalera Vichaaramu : The Carnatic number rendered by Bombay Jayashree completes the package this album is. An uncompromising addition it is! The beautiful orchestration beneath the track keeps it on par with any international theme that we listen to.

Bottomline: After almost two decades of gap.. Rajiv Menon and ARRahman together rediscovers themselves in this soundtrack. Be it the content driven nature of the album, the mindblowing renditions or the exuberant approach of rhythms.. Sarvam Thaala Mayam is a terrific start for the year! 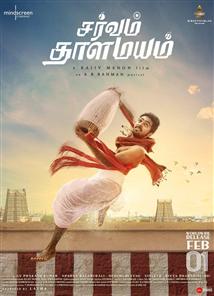