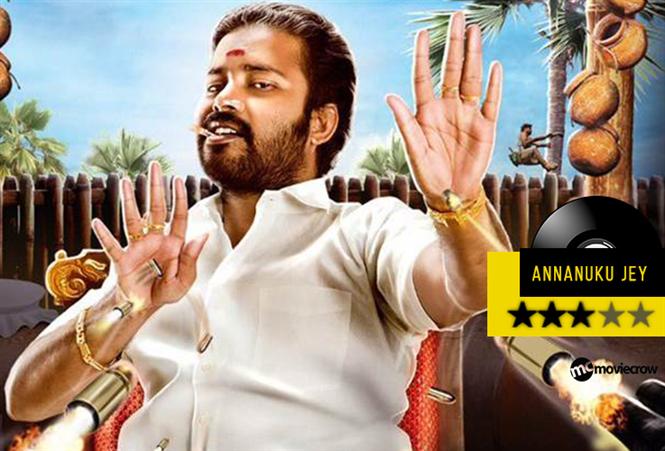 Annanukku Jey is an upcoming Political comedy satire film with Dinesh and Mahima Nambiar in the lead roles. Arrol Correli whose has collaborated with Myskkin in Pisasu and Thupparivalan has scored the music for the film. Let's check out whether Arrol is able to deliver in his mainstream project after Pasanga 2.

Em Peru Matta's hard rock enthusiastic soundscape easily keeps the listeners on the hook from the prelude till the ending with Keba Jeremiah, Stevie and Josh's Electric guitar riffs being the undeniable highlight of this manic track. Emcee Jasz and Stevie ace the singing part retaining the energy of the song throughout, though, at the end 'Ananukku Jay' sounds a little bit jarring, the associated hard rock sounds make one swag.

Maane Theney's tune doesn't work much, but the arrangements by the composer are an intriguing mix switching from loungish sound to enthusiastic brass sounds topped by MSV Raja's clarinet and Babu's trumpet. Raj Kumar's lyrics is a delight to listen while Velmurugan and Lakshmi Pradeep nail the vocals part effortlessly.

Mayakkuraane is the best soundtrack in the album with splendid mesmerising jazz track. Andrea Jeremiah's dreamy vocals elevate the song to another level. Arrol Corelli's nifty arrangements come together as a lovely listen especially with MSV Raja's sax and clarinet playing throughout the song. Mohammad Noor's drums have it's rhythm on its own which gels well with the main tune beautifully.

Arrol Correli's Anjaa Nenjane sounds similar to Santosh's composition where the composer splendidly infuses the jazzy undertone to the main folk tune. Though the tune falls on the flipside, the arrangements however make the listeners to nod for the tune which is tailor-made for Anthony Daasan.

Thaaru Maara is another enticing composition where the tune is questionable but the composer has come up with a top notch composition by brilliantly mixing the Gaana with the faux waltz tune. With Deva's vocals, the tune easily transitions into a full-fledged Gaana supported with the lovely accordion mix throughout the song.

Satti Melam Gaana credited as the traditional gaana composed by Gaana Bala and the song stays true to the genre but the track falls short as a standalone song. Mersal Illai is another song which doesn't work as a song in the soundtrack but may come up more cohesively with visuals.

Theme of Ananukku Jey is truly Arrol's musical sense with the haunting tone accompanied by sprawling strings section and the tinge of Jazz drums.

Arrol Correli has confidently delivered a full-fledged delightful soundtrack for a political comedy and the classy jazz undertone to the compositions makes one love the album more. 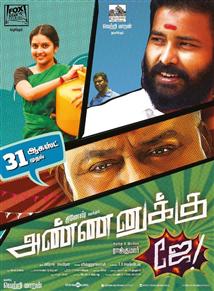