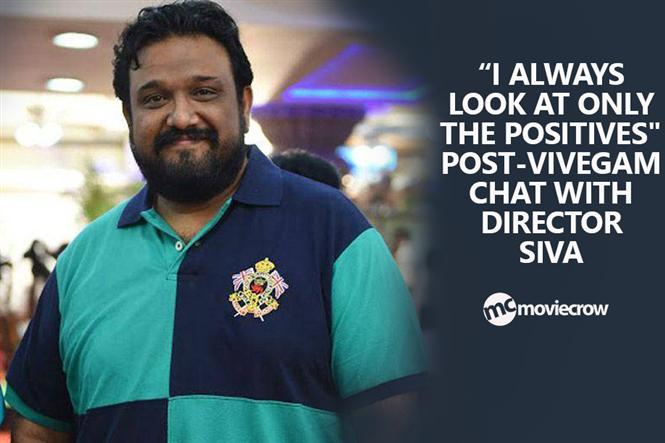 Despite early mixed reviews, Vivegam continues to do well in theatres all over. It is in its 3rd weekend now and many theatre owners have reported that it is doing better than this week's new releases. Kaushik LM catches up with director Siva for a quick exclusive chat,

What do you have to say about the mixed reviews for Vivegam?

"I don't have any problem with such reviews. All that matters now is that the film is collecting well. I believe that a film will stand on its own merits. I'm a result oriented person, and the response from the public has been extraordinary. I'm getting so many calls of appreciation every day.

I don't want to focus on negativity; I want to look at only the positives. That's the kind of person I am! My graph is on the rise; as a filmmaker, I've improved compared to Veeram and Vedalam. I researched a lot for every dialogue too; I've never worked this hard for any film before.

I'm very much thankful to all the positive media reviews, public reviews and particularly Thala fans for accepting a new kind of modern cinema. I have strong faith in God and believe in immense hard work. This is my life's philosophy and I believe it'll surely give me victory. It keeps getting proven again and again."

Vivegam hasn't lost its hold at the box-office yet...

"The huge family audience turnout and the arrival of ladies are the reasons. A lot of them recognized me and personally appreciated me when I went on theatre rounds recently.

Vivegam is a film with no double meaning dialogues and skin show. We've stayed true to the story and there is no place for forced glamour. I'm happy that people have noted all this."

What next? Is it going to be with Thala Ajith again?

"I want to spend time with my family. I was abroad for so long, shooting for Vivegam. I have a lot of ideas in mind but it'll be family time for now. I’ve missed them too much"