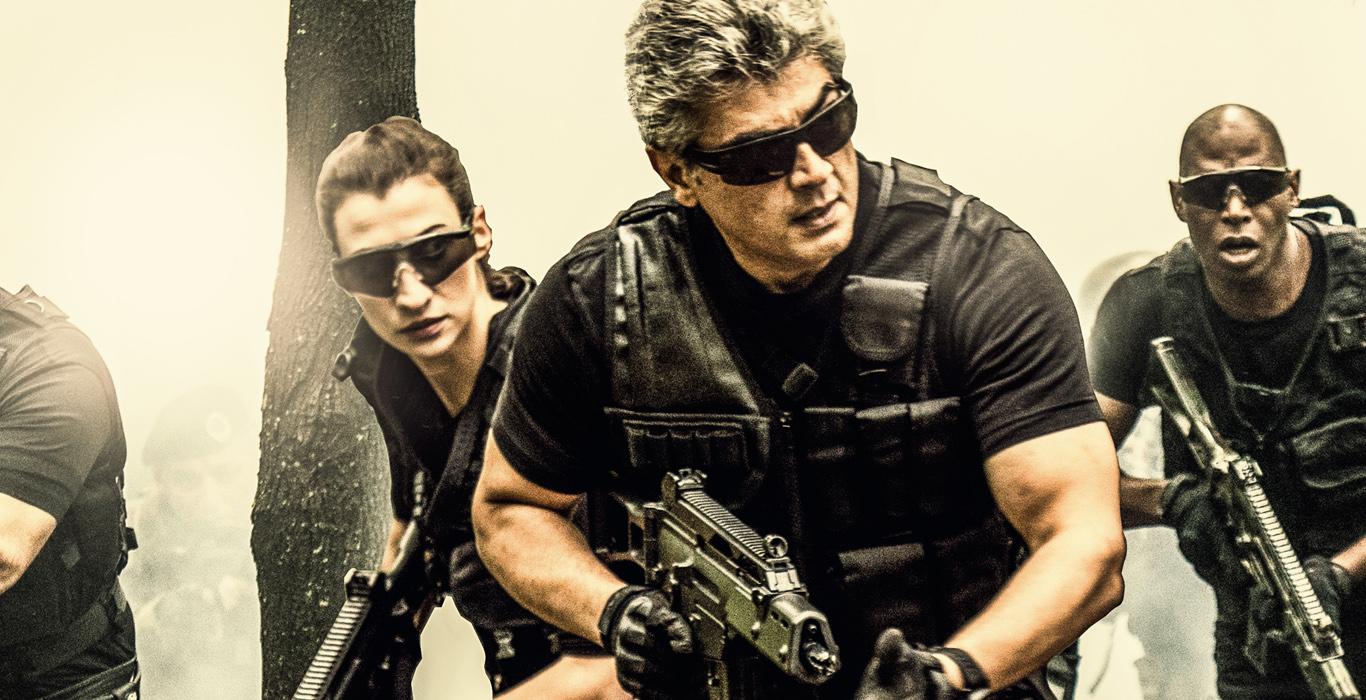 High expectations but over heroism killed the fun. Searching for Akshara is the only interesting block in the movie. Hard work is overshadowed by heroism and poor execution. I'll think twice to watch Ajith's film first day. (more)

#Vivegam_movie_review One liner review : ... ... #Ak_25 ... Hitech action movie from director siva sir First of all watta dedication level of Ajith sir in his age after so many surgeries Seriously man of dedication #salute Plus point: One n only Ajith sir and his dedication First off screen play Action plots - bike chase car chase coming out well Husband and wife sentiment worked out well especially interval block every successful man there is woman music Anirudh done well including Bgm its so conveyancing Minus point : Vivek Oberoi voice its remembrance to vedhalam villain may be they using same dubbing artist for both villain second half very predictable some over dosage scenes included for fan followers Finally more or less vivegam also plus for audience as well as movie cast and crews It takes to next level cinema My rating 4 out 5 (more)

Nice movie. Ajit has done well in dual face role in Action and Sentiment. I learn that the difficult situation to handle the family in calm way. Really nice. Special Effect and Cinematography is good. (more)

I m a normal cinema fan .I watched vivegam .it's a real entertainment movie .Ajith did really well .music superb .the special thing is no dull moments in the film .camera man superb work .but 1 thing 1 want say lots of technical scenes .uneducated ppl can't undestand that so they have give a na ration for that . (more)

Vivegam - High production value, Less engaging!!! James bond/Mission impossible kind of film which had enough one line story which could have been compromised in screenplay as most of the Hollywood movies do. High production value right from the locations to the gadgets and properties used. Excellent BGM, cinematography and editing (not the direction: P ) . Best choice of hero and film is technically well. Ajith's Introduction is top notch with Anirudh Ravichander's BGM followed by a ROFL max bridge stunt . Kajal Aggarwal's performance was good but had been a major speed breaker in the movie esp , in the second half. AksharaHaasan's introduction was mass and performance was ok. Stunt's were OK but the shaky camera work spoiled it more. Bike chase was good spoiled by a sentiment ( Siva's touch :D ). There were few moments in action sequences which resembled pre 2010's Actor Vijay's stunts ( Flying/sliding etc ). A very Weak confused Villian who always praises his enemy didnt help in anyway. Ajith is known for his slow motion shot walks which suit him well and that everyone knows ,well theres a lot of it in this film too. In addition to that there was slow motion dialogues thorughout the film by both hero and villain. It goes in the same pace as the one appeared in the trailer "Indha ulagame unna edhirthalum" . No modulation in any of it. Screenplay was racy but struggled to engage the audience. Average first half , below average second half with a ROFL max climax which can be enjoyable for fans. It went like Kajal started singing, Ajith tore his shirt and fought the viilian was a 1990's formula. Ajith should be appreciated for No smoking, No drinking, no bad words scenes and his dedication to the film which can be seen in the end credits, but that alone didn't help the movie's result. ! #StrictlyMyview!! (more)

Good movie story is only a bit weak and the whole movie is like hollywood range. Unmature tamil peoples wont understand it that s the reason even 7th sense got mixed review. (more)

This movie is nice to see. Its have more dialogs.but is well supports to ajith sir.Ajith sir works hard in vivegam.Anirudh's music is awsome .Editor Rupan well worked.Siva sir you did it .It is fully help to improve brain power.More fights are here it is the plus to this movie . AJITH & KAJAL comination is well helped here Movie is awsome (more)

Movie is not as bad as ur Review.. Can easily watchable (more)

First of all, such a great attempt has to be appreciated.. A lot of technical and phsyical work has been put in to complete the movie. Director Siva has broken his stereotype of Movie making and has tried something fresh and new which has not been explored in Tamil cinema. To most of the extent, he has been successful in keeping the audience engaged in the cinema hall.. An Average script with a fast paced screen play. At no point, one could feel there is a lag in the screen play. Ajith Kumar is the soul of Vivegam. The actor has underwent a lot of physical stress for this role and he emerges like a perfect James Bond character. We could easily he is the best choice for an International script. Kajal Agarwal, Vivek obreoi play good roles too. It's a landmark film in cinematographer Vetri and music director Anirudh career. First of a kind attempt in Tamil cinema which shud be encouraged for it's execution and production value. (more)

First of its Thala show all the away.., he simply stole the show with his Screen presence, dialogue and tonned physique... Anirudhs songs and Bgm is big backbone for the film.... Editing and dop also in top notch... but second half was lagging in engaging factor... other wise movie is a treat for thala fans and good watch for general audience..!! (more)

This Film can be watched only by People who Respect very Hardly Those Technicians and AjithKumar's Hardwork and Dedication. Rather than Nothing to say about the Director ... (more)

#Vivegam : Film is all about Raw agent type genre !! One d whole Story Film content was Average n Screenplay lacks on whole Film. First Half Starts with Asual entry n bit unbelievable scene tgen goes Okish level of screenplay n stunts was awe manner n near by intermission of 15 mins was really interesting one n very normal Interval block. Second half Starts with Asual tip & trap between hero n villain n continuesly conversation between d person's made d film drag !! Full screenplay was predictable n something was really missing in d Film to enjoyed completely !! Film biggest Plus is one n only "Ultimate Star Ajith Kumar" his physique n body language n hardwork seen each frame but director failed to impress with Screenplay to make it more crisp !! Then Anirudh Surviva & Viduthalai song was good n BGM highly saved d film kajal looked beautiful but in some scenes really made her look bad by director !! Director Siva ungaluku always Mass village film than ll b apt to do with Big kindly do try in that genre in future !! We need Another Action n huge commercial elements film from "Thala Ajith Kumar" with many Masses n goosebumps scene's .. hopefully in next film ll b seen!! Note : Ajith sir Please Stop doing your next film's with director Siva n need to utilise ur hardwork completely n audience shld be entertained complete !! Verdict : Word about Vivegam is it's not that much "Vivegam" except in certain parts!! One-time Watchable Flick for "Ultimate Star Ajith Kumar" Rating: 2.5/5 (more)