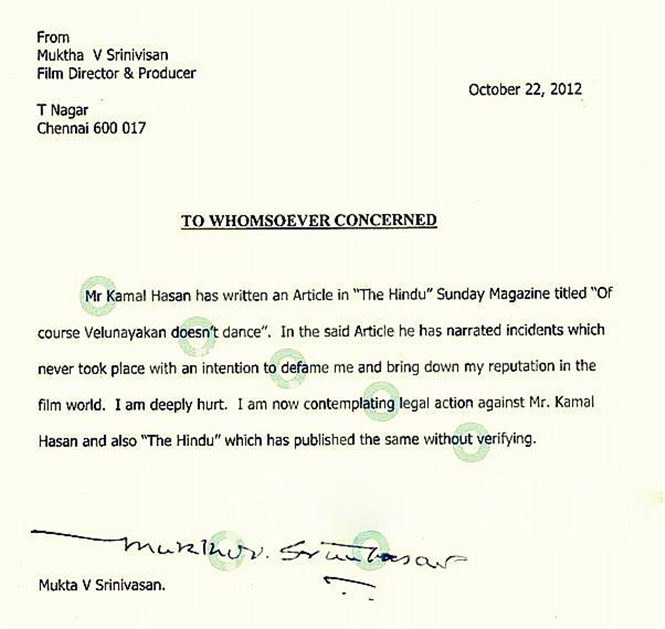 In an interview to The Hindu, Kamal Haasan confirmed the long-running folklore about 1987 classic movie, Nayagan. The story has been used for many years as a way to explain why Producers may not be able to pre-judge audience taste or director's vision.

The story goes like this : Muktha Srinivasan during the making of Nayagan was upset because of many reasons -- budget over-runs by months, technical aspects of the movie was not up to the mark and that the story was not commercially viable. When Muktha Srinivasan pulled out during the final stages, Mr. G.Venkateswaran (GV, Mani Ratnam's brother) stepped in and took over the project and the rest is history. The folklore ends in a typical cinematic style of how Muktha Srinivasan ended up requesting Kamal and GV whether he could go to Delhi and collect the National Award from the President. We don't know how much of this story has been airbrushed as it circulated for almost couple of decades. After many years, Kamal decided to make this story public in a leading journal to mark the commemoration of 25th year of Nayagan.

Muktha Srinivasan sent a legal notice (above) to Kamal and mentioned to ToI "Kamal has given a long write-up about Nayakan, a film which I produced 25 years ago. He has claimed that I was 'tight-fisted' and from an 'old school' in it. He has abused me in his article, and this has deeply hurt me. I have been upset for the last couple of days and have lost my peace of mind. I've been unable to do my job ever since I read the piece. I don't understand why he has to write about a film that was released long ago"