Director Thiru's Naan Sigappu Manithan was a solo release last Friday (April 11) and the movie had Vishal and Lakshmi Menon in the lead roles. Check out the box office rankings of Tamil movies in Chennai during last weekend (April 11-April 14).

Vishal's Naan Sigappu Manithan opened to mixed reviews, in which Vishal's performance and Thiru's screenplay in the first half were unanimously praised. However, the second half may be too brutal for family audience to take in. Thanks to the extended weekend, the movie has taken a good opening.

The collections of OKMK has taken a huge dip, as many screens have replaced the movie with Maan Karate and Naan Sigappu Manithan. In spite of the innovative script and positive reviews, the movie could not sustain at the box office due to lack of star power and weak promotions.

There are 4 other movies that are occupying around a handful of screens in key locations are Nendunchalai, Cuckoo, Thegidi and Nimirnthu Nil. 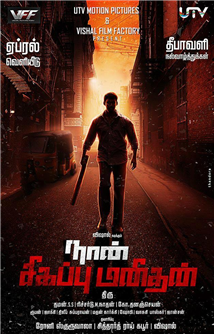