Suseentharan is one among the very few of the current generation directors who makes a sincere effort to grapple with different genres. After the hard hitting  'Aadhalal Kadhal Seiveer' his new offering 'Pandiya Nadu' is a gripping action drama where he makes a definite impression again.

A pretty straightforward story. An ordinary man whose life is affected by the dirty underworld - political nexus.He has nowhere to go but take on the baddies himself. A quite predictable storyline but one that is narrated neatly and most importantly without a compromise on the logic front.

This is definitely one of Vishal's best performances. Reading the plot you might have started wondering that Vishal is not new to this template of a one-man army seeking revenge. But kudos to Suseentharan for incorporating the timid nature to Vishal's characterisation which makes the movie rise several notches up. Vishal shines in the romantic interludes with Lakshmi Menon who continues her impressive run. These portions in the first half with a nice tinge of humour work out remarkaby well. The climax fight sequence is another one in which our hero scores richly.

Bharathiraja as the caring father hits the bulls eye with his restrained performance. Like in Suseentharan's 'Naan Mahan Alla' the father - son relationship has been portrayed convincingly here too. Sharath Lohitashwa as the ruthless villain is very convincing. It is hard to imagine that he is the same person who played the naive father of Nadhitha in Edhirneechal.Soori makes a mark in what is more of a character role as Vishal's friend. Guru Somasundaram plays Vishal's brother. It takes a while to realize that he is the one who played the character Kaalayan in 'Aaranya Kaandam'. Vikranth makes his presence felt even with very few scenes. His wide open eyes which has anger brewing in it communicates his character despite very few dialogues. He also looks supremely fit and this young man can surely make a mark if aided by proper scripts.

Imman is in such good form and Pandiya Nadu is another feather in his cap. All the songs are good. Their simple and neat presentation on screen also impresses. Madhi's cinematography is an asset. The chase sequence in a bus terminus when Vishal is on the run and the climax action block give a live feel through his lens. The stunts are brilliantly choreographed with such raw feel.

The most important aspect of Pandiya Nadu is that logic is never put in the back burner. Vishal who is timid in nature remains so till the end. He does not transform into a one man army whose punches send the henchmen flying. The climax action sequence is so cleverly done. The hero is shown  vulnerable even in this ultimate battle. Vishal's body language in these scenes is top class. A lot of thought has gone into even small things that explain Vishal's character. For example you would hardly find an action hero driving an Activa. Suseentharan deserves rich applause for such application of mind that is so often gone for a toss in most action flicks. The revealing of what what happened to Vikranth is disclosed at just the appropriate time and hence you are desperate to see Vishal strike a blow to the villains. And when this happens in an action flick it definitely strikes a chord with the audience. The emotional bonding between Vishal and Bharathiraja just before the end credits roll is brought out beautifully by both the actors with very few dialogues for assistance.

Pandiya Nadu is a gripping action flick that gives great importance to emotions and logic.The hype about the film has been a little low key compared to it's counterparts. It is up to the audience now to embrace this quality offering. 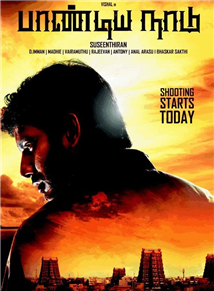