Jannal Oram is the Tamil remake of Malayalam film 'Ordinary' directed by Karu Pazhaniappan starring Parthiepan, Vimal, Vidharth, Poorna and Manisha Yadav of 'Vazakku Enn' fame. The audio of the film is set to be launched today (October 17). Music by Vidyasagar.

Celebs gracing the function and releasing the audio are a common phenomenon while some others prefer to launch their audio at a radio station but the makers of Jannal Oram have come up with a unique publicity strategy for the film's audio.

The Jannal Oram team has hired a special bus to reach out to the audience. The lead artists Vimal, Parthiepan, Manisha Yadhav, Ramana, Vidharth, Rajesh, Karu Palaniappan, and other technicians will be travelling around the Chennai city in the bus. The team will be stopping at certain bus stops in the city and will be launching the audio among the public. The team will be covering Vadapalani, Tambaram, Guindy, Chrompet, Pallavaram and Koyambedu.

Suriya will be releasing the audio at Kamala Theatre today evening at 6 pm. The film is slated for release in November. 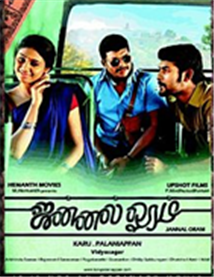