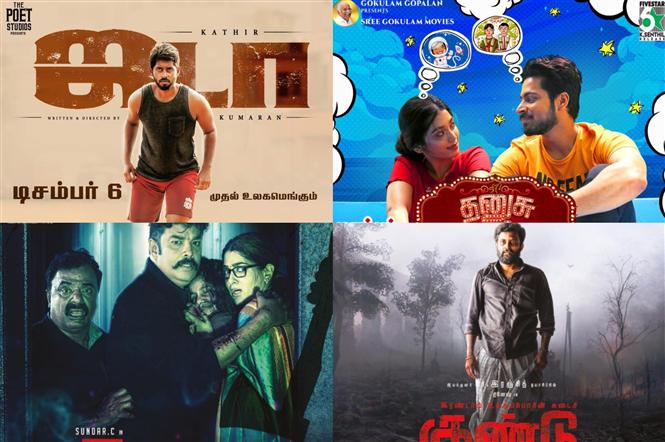 As many as four Tamil movies are releasing this Friday (December 6, 2019) and here is a quick preview of what to expect from each of these films:

A story of a lorry driver travelling across landscapes with focus on workers' poor-condition in scrapyards and how the psyche created post world war 2 still affects people today is what the film is about.

This Pa. Ranjith produced movie is U certified 2 hrs and 21 minutes run-time and will see the debut of his former associate director Athiyan and indie music composer Tenma.

Kathir who recently played a football player alongside a big star, is coming this time with a football based drama, which he incidentally filmed before Bigil. The movie is said to portray the realistic version of the sport and will based on 7's football, a game quite popular in the streets of Chennai.

The U/A certified film has been directed by Kumaran with Sam CS for music and comes with a run-time of 2 hours and 12 minutes.

A rom-com from debut director Sanjay Bharathi, the movie seems to be pretty much Harish Kalyan's usual turf, only this time 'astrology' playing the pivotal part in the story. Also starring Reba Monica John, Dhanusu Raasi Neyargalae is U/A certified and comes with a run-time of 2 hours and a minute.

Director Sundar.C is playing a cop who will exercise demons in this V.Z. Durai directed horror film; Actresses Vimala Raman and Sai Dhanshika play pivotal roles in the movie which comes with a run-time of 2 hours and 13 minutes and is U/A certified.