Cricketers donning the greasepaint in K-town 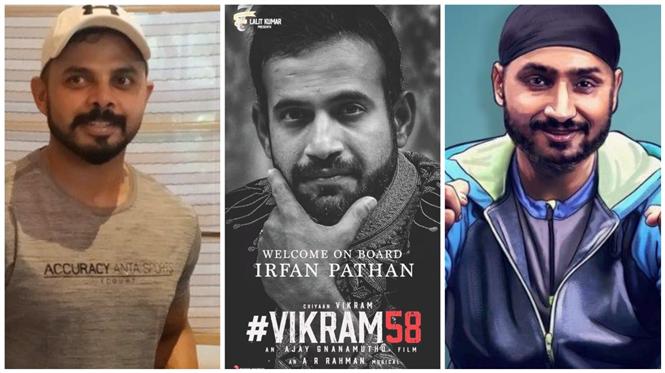 This evening seems to be loaded with lots of surprises involving real life cricketers embarking on their journey in Kollywood as actors. The official announcement about couple of reigning cricketers making their debut has become the sensational buzz for evening. Yes, it’s official that Indian Cricket Team’s all rounder Irfan Pathan will be debuting as actor, playing an important role in Chiyaan Vikram’s tentatively titled ‘CHIYAAN 58’. The film is directed by Ajay Gnanamuthu (Demonte Colony, Imaikka Nodigal fame) with Priya Bhavani Shankar playing the female lead and AR Rahman composing music.

On the other hand, another official announcement has been made that well celebrated Indian spinner Harbhajan Singh will be playing an important role in Santhanam’s Sci-Fi entertainer ‘Dikkilona’.

It is noteworthy that last week, there was an announcement claiming that Sreesanth will be debuting as an actor in K-Town through a straight Tamil movie. Touted to be a horror-comedy, the film will feature Hansika Motwani in lead role and Sreesanth as antagonist.

Well, this is really astonishing to see that cricketers are all set to rule the Kollywood town for next forthcoming seasons.