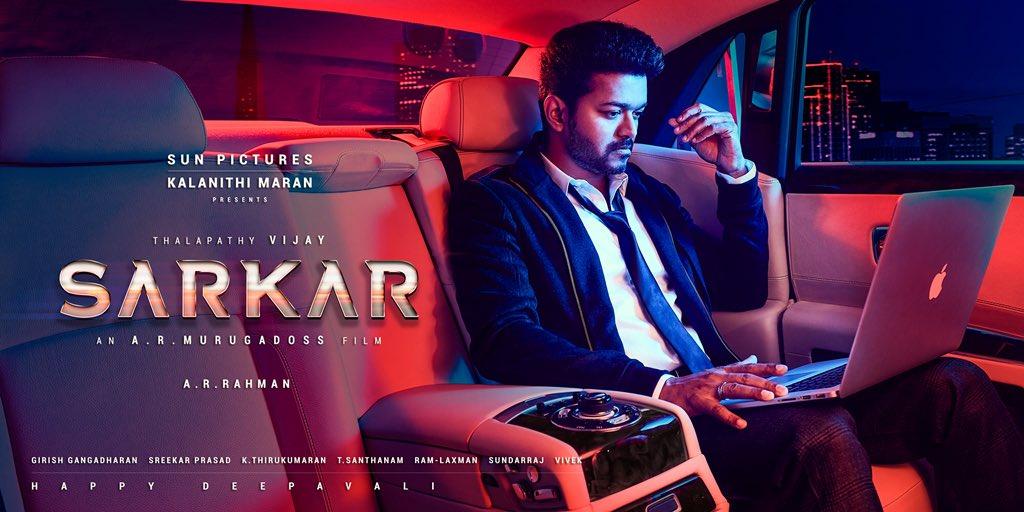 story wise nice and it was only written for thalapathy. Nice dialogues and good message given in this story. (more)

A political awareness movie...could have included more of yogi babu to make the movie more lively..AR music was amazing as usual.Vijay & keerthi dance and dialogues were good.Hyped up by political parties. (more)

Movie is realy fantastic......Thalaiva u made it.. (more)

Movie failed to create the magic which Thuppakki and Kathi did. Vijay did justice to the character and he was delight to watch on screen be it with his signature dance moves or fight scenes. ARM wanted to question many politics things which is happening or happened in Tamil Nadu and choose Vijay (who is interested in Politics) but the preachy screenplay and length didn't help the movie. Varalakshmi character was strong but it was underused and there was no strong villain in the movie. Yogi Babu was also underused and Keerthy Suresh was just another actress who had nothing to do expect dancing with Vijay in songs. Logical loopholes, over the board fight scenes and very Okaayish songs were major drawbacks of the movie. (more)

The underlying message, strong performance by Vijay and also nods to several real-life incidents and people make Sarkar a smart and yet a bit stretched out. Must watch ...SARKAR... (more)

Sarkar Review - Dull second half plays spoilsport Our hero Vijay plays a corporate tycoon Sundar Ramaswamy(apparently modelled on Sundar Pitchai). While the first half was quite breezy with message on vote theft and 49 P, an actor's cameo role as lawyer Ram Jethmalani proved as an irritant. The fact that he spoke free flowing Tamil more so the reason. The fight sequence under bridge fitted correctly. Keerthy Suresh as Vijay's love interest gave a measured acting performance. Where the film slipped was when the core concept revolved arund a politician named Masilamani. Pazha Karuppiah tried to do justice but could not offer much. Radha Ravi as a politician named Rendu did small variations here and there apart from that nothing much.. AR Rahman great music director but unfortunately the weakest link of the film. Both BGM and songs were in average level. Oru Viral Puratchi powerfully picturised. There were lots of dull moments in second half but Muragadoss compensated with fights and comedy sequences.Overall engaging crusade against political system. But cannot fathom Muragadoss anger only against the current political party. (more)

Must watch... Thalapathy vijay show all the way!! (more)

Screenplay could have been better. Could able to enjoy few fight scenes and dance. Other than that forced emotions, major logical loopholes,unnatural dialog delivery, limiting the scenes for co-actors' roles made this movie drew a little step backwards from the average experience of the movie. Overall a one time watch for just this message "Section 49P". (more)

#Sarkar Review First Half : Asual Thalaivaar entry with thunderstorms by fan's but this time came as simple entry !! First half moves with plot n story but here n there little drag n before 20 mins of intermission pick's up in high speed mode !! & Intermission came first half end's with okish mode. Second Half : Made an Film to watch against full & full political plot n thrashed all truths n revealed all current concepts on screen with Massssss & Hard hitting dailogoues and made worthy of Film & Film got saved. Thalaivaar Vijay One man Show all the way !! His style & arrogance level together seen in this Film is treat to watch it. A.R.Rahman Cool song's & Class's BGM given weightage to Film. A.R.Murugadoss once again given Social cause with political Film in straight way !! If first half screenplay made tighter might b Vera level Film but still it's good to watch it. Verdict : Strictly one time watchable Flick for this festival session & for Thalaivaar Vijay Go for it & celebrate this festival mode Rating : 3 out of 5 (more)