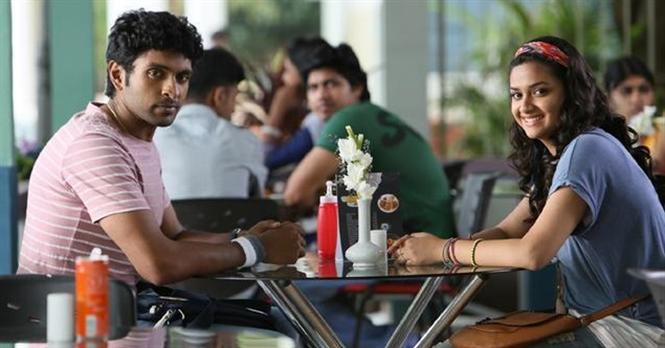 GV Prakash – Vijay combination churned out many successful soundtracks in the past and they came up with Vikram Prabhu as lead for Idhu Enna Maayam. Let’s check out whether this combo retains their previous repertoire with this or not.

High Voltage is short two minute track which has passable tune filled  with electronic dance number sounds and rap portions by M C Vickey which is quite conventional nevertheless hummable.

Successful combo G V Prakash and his better half Saindhavi came back after a hiatus for another dreamy laid-back melody Iravaga Nee. G V Prakash’s arrangements using acoustic drums throughout the song, wailing violin in the second interludes and Symphony strings interspersed with rainy aura gels well with the mood of the song and also makes up for the slow pace.

Machi Machi, high spirited jubilant song in the vocals of Udit Narayanan, Devan Ekambaran with contemporary captivating lyrics by Na Muthukumar which targets youth audience. G V’s arrangements with catchy electric Guitar riffs in the prelude, acoustic drums and mandolin in second Interludes are the USP of the song. Watch out for Tin whistle by Navin Iyer in the first Interlude.

Irukkirai has GVP’s stamp all over it and it’s quite difficult to snub away the Déjà vu factor in the tune. However, Harini’s mellifluous voice along with G V Prakash’s vocals and presentation of the song with some interesting flute section makes up for the minor grouses in the track.

Suttrums Boomi Mele starts off in a melodious note but soon digressed into routine rock number one can expect from G V Prakash Kumar. Tune is also pedestrian one which fails to clasp the listener despite ebullience vocals by Shireen Shahana.

A Walk to remember (Theme song)

Theme song by GVP is an engaging listen despite brief one mixed with whistles, solo violin and novelty touch with piano keys.

Verdict: Once again G V Prakash delivers another engaging soundtrack for A L Vijay akin to their previous works especially two wonderful melodies stand out in the album.