Ajith's Yennai Arindhaal took an earth-shattering opening across the world last weekend, and especially in Chennai, the movie was the unanimous choice of all movie buffs and 'Thala' fans alike. Check out the box office ranking of Tamil movies in Chennai during last weekend.

Ajith's stellar performance has impressed one and all, while Gautham Menon's screenplay has received slightly mixed response. However, it is good to see him finding back his touch. It would be crucial for the film to retain most of the screens in the upcoming weekend, with Dhanush's Anegan hitting the screens.

Vikram's I is still going strong across multiplexes, and people are attracted to the theatres to witness Vikram's painstaking efforts. Having completed 25 days at the box office with high occupancy levels, the movie has been declared a mega hit.

In spite of positive reviews, SJ Surya's Isai lost many of its screens in the second weekend, due to the release of Yennai Arindhaal. Ideally, the movie should have released with a larger window of free run.

GV Prakash's Darling is running across a handful of screens, and the movie's 'Hit' status has given a dream start to GV Prakash's acting career.

Dhanush's most anticipated film Anegan will be hitting the screens on February 13. The teaser, trailer and 'Danga Maari' track have created a huge buzz already. 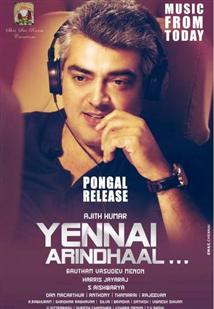