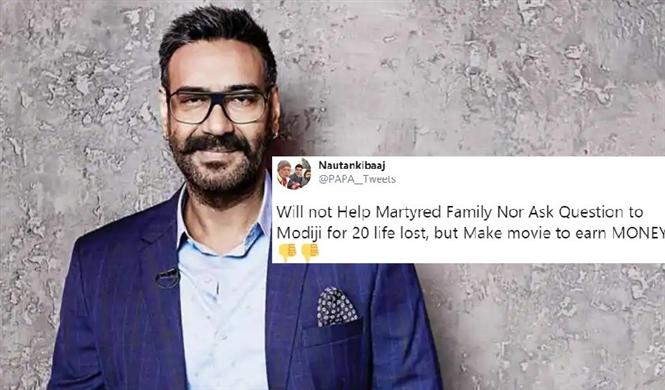 Earlier today, Bollywood actor Ajay Devgn who has so far maintained a supporting stance for Indian governments ruling party confirmed that he will be producing a movie based on the India-China border dispute at Galwan Valley. The untitled movie's description said that it will 'narrate the story of the sacrifice of 20 Indian army men who fought the Chinese army'.

Displeased with the timing of the movie's announcement especially since India-China LAC tensions have still not subsided and it has been less than 20 days that many of the Indian army men were martyred, Indians took to twitter to express the same.

Most Bollywood celebs won't risk even a tweet in defence of country and countrymen. But if there's money to be made off real people's real blood, they arrive faster than a speeding bullet. https://t.co/56BEwAbjAo

Will not Help Martyred Family Nor Ask Question to Modiji for 20 life lost, but Make movie to earn MONEY.
👎👎#AjayDevgn #MunnaBhaiMBBS pic.twitter.com/AxyH4VBG0q

And villan will be Indian Journalists.....

Surgical strike, Balakot airstrike, Uri, now Galwan. India is hell on retaliations but only in movies. Hell of satire.https://t.co/a0u7LzSlz8

.@ajaydevgn Sir if you are planning to commercialize Galwan Valley Clash with your movie.Then also announce to give half of its profit to those martrs family.#AjayDevgn #GalwanValleyFaceOff

It's Ajay Devgn. Bollywood is so predictable 😅 https://t.co/byWfuMK9FT