8 Best films of KS Ravikumar you can watch anytime! 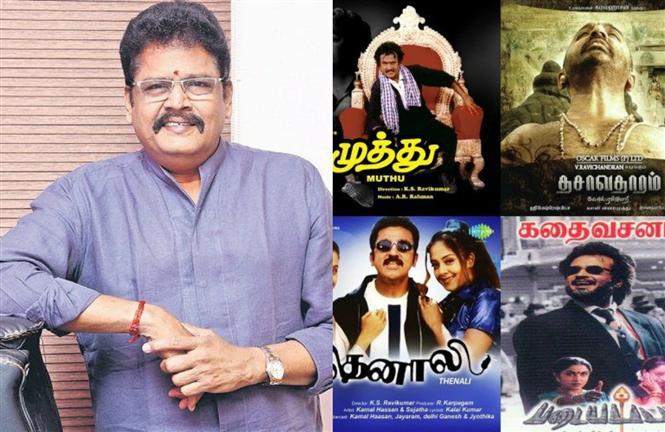 KS Ravikumar is one of those very few commercial directors whose movies have stood the test of time. The director's unique ability to bring out the 'timelessness' in his movies' entertainment value, is a craft not mastered by many 'masala' film directors.

Not only do his movies enjoy repeat value, but K.S. Ravikumar's films have also boasted of having the right mix of all elements required in a commercial Tamil film. Some such films that the Kollywood audience enjoys revisiting anytime are listed below:

One of K.S. Ravikumar's most iconic films, Padayappa recently celebrated 21 years since release, and the fanfare surrounding the movie even today talks of the impact it has on the Tamil audience. Be it the famous Neelambari character or the car she used or her equal screen-space with a star actor like Rajinikanth, Padayappa was one movie that re-defined female roles in Kollywood. This is all the while maintaining the commercial aspect of the film.

The concept of giving the female villain a role as important as the film's hero continued in Panchathanthiram too and K.S. Ravikumar's specialty of incorporating it without being too on-the-nose was seen as well.

Another specialty of K.S. Ravikumar is taking a concept and making it his own. Avvai Shanmugi, which is neither a blatant copy nor a butchered remake does total justice to its original inspiration Mrs, Doubtfire, and 24 years later, Kollywood is yet to see a film living up to the standards of Avvai Shanmugi in its genre.

A science-fiction disaster movie with philosophical views is how one would describe Dasavatharam and only K.S. Ravikumar could have made a successful commercial outing out of this niche genre.

One artistic aspect that K.S. Ravikumar's movies hold is top-notch production value without an exorbitant budget or exotic locales. Muthu is a good example of this, for it was shot entirely in Indian locales yet visual appeal was one of the film's strongest points.

K.S. Ravikumar's films are known to incorporate comedy as a major element but even in his filmography, there is no better laugh-fest than Thenali. In an era of performance-based humor, Thenali relied majorly on the writing which besides working out for the movie was sheer genius.

Blockbusters are a term often taken in connection with the director and this Karthik, Nagma starrer was one of them. An unsuspecting screenplay with a balanced tone is what made the movie fun.

A crown-jewel in K.S. Ravikumar's filmography, Nattamai in pop-culture is known as the film which gave the line "Nattamai, theerpa maathi sollu (Chieftain, change your judgement). The film's characters and their involvement in the village panchayat are so iconic that they have been spoofed and parodied many times over, and are a reference point for the Tamil meme community of today's times.