The makers of Asuraguru have released the second trailer from the film today, Jayam Ravi unveiled the trailer on his social media page. The movie which stars Vikram Prabhu and Mahima Nambiar in the lead roles is directed by A Raajdheep.

The movie is produced by JSB Sathish under the banner JSB Film Studios and has music composed by Ganesh Raghavendra. Asurguru is a heist thriller which is set to hit the screens on March 13. 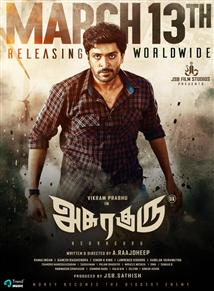