MC Weekly Music Round up: Week 29 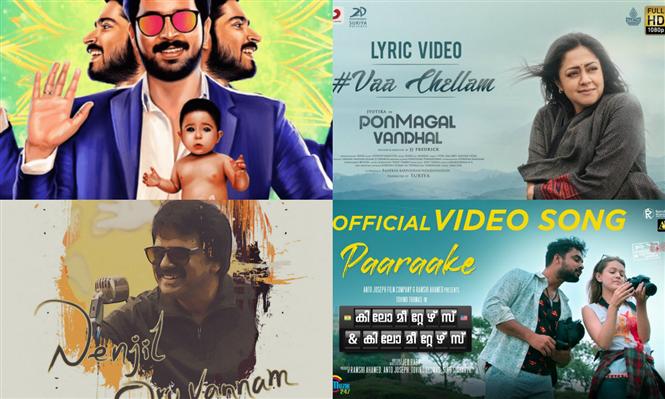 Umamaheswara UgraRoopasya (Telugu): Bijibal: Ningi Chutte: Bijibal debuts in Tollywood for the remake of Maheshinte Prathikaaram and the composer retained his Idukki tune for Ningi Chutte. The Telugu version also as endearing as the original one and the mellow tune is complemented by the beautiful wholesome lyrics by Vishwa while Vijay Yesudas delivers impeccably.


Kilometers & Kilometers (Malayalam): Sooraj S Kurup: Paaraake: Sooraj S Kurup always had a knack of blending the brilliant melody layered on the nuanced arrangements. Paaraake is the wonderful concoction of the sounds and the tune brilliantly transcends into the semi-classical towards the Charanam where Jossy Alappuzha's flute is segued beautifully.


Pon Magal Vandhal (Tamil): Govind Vasantha: Vaa Chellam: The contemplative soundscape is nothing new for Govind Vasantha and the prelude of Vaa Chellam, beautiful lullaby also starts in a similar fashion backed by Keba Jeremiah's guitar strums. Brinda Sivakumar aces the rendition and the tune in anu pallavi is a charm while the second half of the song features the brilliant mix of Shruthi's Mridangam and chorus.


Dharala Prabhu (Tamil): Anirudh Ravichander, Sean Roldan: Title Track, Kaadhal theevey: After a string of mediocre songs from various composers, Anirudh and Sean Roldan save the soundtrack. Anirudh reuses Gang leader Telugu song title track. The soundtrack gels well with the Telugu version whereas it sounds odd with the marriage setup in the promotional video and also Vignesh Shivan's lyrics don't help much either. Sean Roldan's Kaadhal Theevey works much better with Sid Sriram behind the mic and though the tune takes its own time to settle, the composer did a neat job with respect to Charanam portions.

Nenjil Oru Vannam (Tamil): Srinivas: Srinivas comes up with the independent composition and though the video feels like dated one, Srinivas backs up with the lovely tune while Vijay freckles the tune with the lovely wordplay which gives nods to the sponsor Nippon Paint also. The arrangements feature the beautiful assortment of classical elements dominated by Purbayan Chaterjee's Sitar and Kiran Kumar's flute.