MC Weekly Music Round up: Week 26 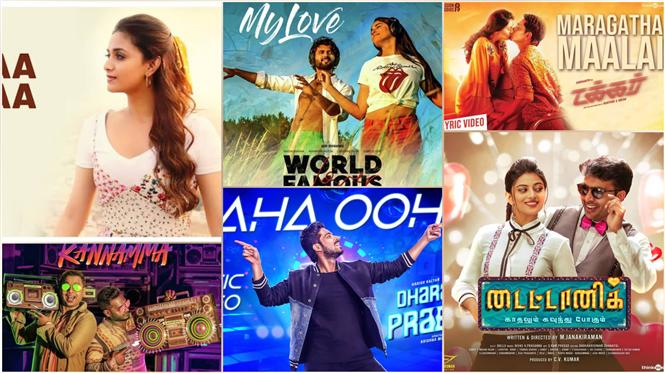 
Gaandu Kannamma (Tamil): Vivek-Mervin: After Orasaadha, Vivek-Mervin returns with another single Gaandu Kannamma and as expected the tune is incredibly accessible one which is more than enough to stay on the charts for sure. Though Ku Karthik's lyrics took some time to seep in, it fits well with the overall relaxed mood of the tune.


Takkar (Tamil): Nivas K Prasanna: Maragatha Maalai: Nivas's tune takes some time to seep in but eventually turns out to be the beautiful song and credits go to the superlative rendition by Pradeep Kumar and Vijay Yesudas while Chinmayi steals the show with the dreamy vocals. Nivas kept the arrangements racy especially loved the flute bits by Navin Iyer.


World Famous Lover (Tamil/Telugu): Gopi Sundar: My Love: Though the trailer received mixed responses, the first single by Gopi Sundar takes back to the composer's Bangalore Days album. The track rides on the Sumesh Parameshvar's splendid guitar work throughout while Saindhavi/Ramya Behera aces it with their whispery rendition in the respective languages.


Miss India (Telugu): Thaman S: Kotthaga Kotthaga: Thaman continues to revamp his musical style and largely deviated from his Percussion dominated music but still the autotuning of the composer's own vocals irks a lot. Shreya Goshal's breezy rendition and Kamalakar's flute solos compensate a lot for Thaman's processed vocals and the hummable tune makes this one works.


The Life of Ram is the only song in the soundtrack where Pradeep Kumar is involved whereas he sang almost all the songs in Tamil. Govind Vasantha brilliantly adapted the Life of Ram and Violin usage around the 2-minute mark deserves special mention which serves as the hook of the tune. The composer retains the Thaaney Thaaney hook which blends in well with the tune.


Inthena is another beautifully tweaked version of Vasantha Kaalangal which is the favourite from the Tamil soundtrack. Inthena also dominated by the guitar strums which tugs your heart and the melancholic mood along with the beautiful soundscape will make anyone fall in love with this composition. Pranam, the equivalent of Thabangale and the guitar strums by Keba Jeremiah lingers in the listener's mind after it ends also. Once again Chinmayi and Govind Vasantha are top-notch with their rendition.

Dharala Prabhu (Tamil): Oorka: Aaha Ooho: After Onnumilla from Aadai, Oorka composes another soft rock-based song on similar lines for Dharala Prabhu. The track starts in a punchy engaging manner but soon fizzles out towards the Charanam while Pradeep Kumar shines with his bass guitar and Bharath Shankar aces the rendition comfortably.

Choosi Choodagaane (Telugu): Gopi Sundar: Venakane Unna: Gopi Sundar cleverly tweaks his signature elements and conceived the gorgeous melody in Venakane Unna. Chinmayi's presence in the mic gives the familiar vibe especially with the hear before feel of the tune but the singer aces the rendition impeccably.