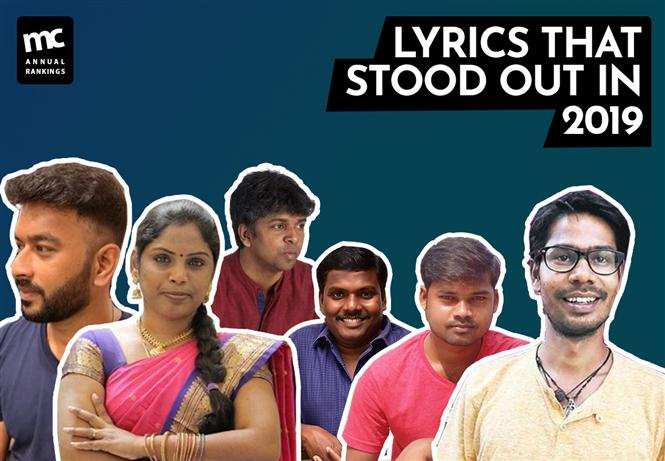 Amidst all the Verithanam and Marana Maas we had this year, Singapenney from Bigil and Kannana Kanney from Viswasam got their dues, thanks to their easily accessible lyrics. Inspired from the same, we have curated [not ranked] numbers such as the latter two, that hold outstandingly beautiful lyrics from year 2019 here.

1. 'Megadhoodham' from Airaa written by Thaamarai had that vintage charm. Padmapriya Raghavan's rendition of Thaamarai's antique choice of words spell an achingly haunting chill all over the track.

2. Karthik Netha is definitely a revelation when it comes to blending the old school aesthetics and yet renovate the words put out to express. And with 'Pularaadha', he hits it right out of his heart!

3. 'Maya Maya' from Sarvam Thaalam Mayan, probably the most underrated melody of the year had a mellifluous flow of lyric by Na.Muthukumar. The number that celebrates the devotion in love is a serene accounting of all things pure.


4. 'Dhooramaai' and 'Vaanthooral' from Peranbu by Vairamuthu had a streaming breath of hope taking over. The songs therapeutically capture the spirit of love and compassion the film speaks about.

6. 'Anbe Peranbe' written by Uma Devi for NGK which went on to become one of the huge chartbusters of the year is a killer melody that unfortunately didn't get its due with respect to better placement or visuals. Still.. the dynamic love the song addresses come powerful with the poetess's pick of words.

8. 'Aalanguruvigalaa' written by Mani Amuthavan talks about the beauty this nature is and gloriously sings the joy of coexistence. Sung by Sid Sriram, the number addictively sings out a bird's heart!

9. Enai Nokki Paayum Thottaa had several lyrically great tracks. Maruvaarthai, Visiri, Naan pizhaippeno were all stunners. But one that came out later and completely caught my attention was 'Yen Nijame' written by Madhan Karky. The song speaks about the sparse emptiness that constantly comes on and off in the relationship. The finishing postlude that talks about contrasting persons the characters are is brilliantly brought up by the poet.

10. 'Elluvaya pookkalaye', the heartbreaking number from Asuran written by Yugabharathi is a shattering work. The folklore touch that addresses the caste violence in the traditional Oppaari format devastates you a bit every time you listen to it!

11. 'Kulurudhaa pulla?' from Oththa Seruppu unanimously won hearts. The constant sense of conforming, desperation to know whether it all matters to her.. is what makes this song the stinging hook of pain it is! Vivek's organic blend of unadulterated Tamil words and the touch of a colloquial, folk slang etches a beautiful rural flavour to the number.

12. 'Nilamellaam' from Irandaam Ulagaporin Kadaisi Gundu by Uma Devi. The track that talks about the oppression of working class powerfully questions the brutal capitalism, speaks of rights and equality & calls for a rebellion resonates increasingly much with what goes on in the country every day.