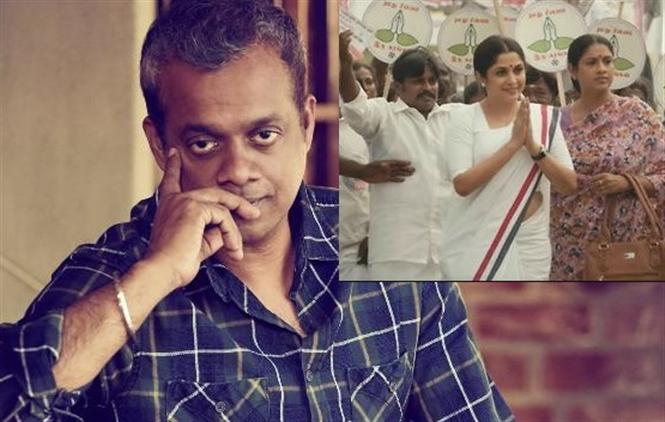 Gautham Menon, joint-director of MX Player's upcoming web-series Queen, has in a shocking media statement denied the story to be that of late Chief Minister J. Jayalalithaa, despite bearing a striking resemblance and general assumption that it is the first of her screen-biopics. In recent print interviews, Menon has been going around quoting,

"There is a book titled Queen, written by Anita Sivakumaran. The team of MX Player bought the rights and they approached us to make a web series on it. My business partner and writer Reshma Ghatala adapted it into a screenplay..It is a very inspiring story of somebody who is forced to quit studies and thrown into the film industry for survival and how she enters politics."

If one may recall, we had pointed out that Jayalalithaa's name was nowhere to be seen in the Queen Trailer and now addressing the same, Menon has said, "The main character's name in the book is Kalai..We have taken some inspiration from the book..If you and others, including the party cadres, find the resemblance to Amma (J. Jayalalithaa), then it's not my fault but I am honored and proud..."

It is worth mentioning here that Queen is currently in a legal tussle with Jayalalithaa's niece Deepa Jayakumar and Menon who told the Madras High Court on Monday that he intended to premiere the web-series on December 14 as planned, is due to file his reply [as to why the team did not seek permission from living relatives] today, pending hearing.

Season 1 of Queen comes with 11 episodes, with Anikha playing 'Shakthi Seshadri' from 13 to 17 years, Anjana between 18 and 30 years of age and Ramya Krishnan for the rest.