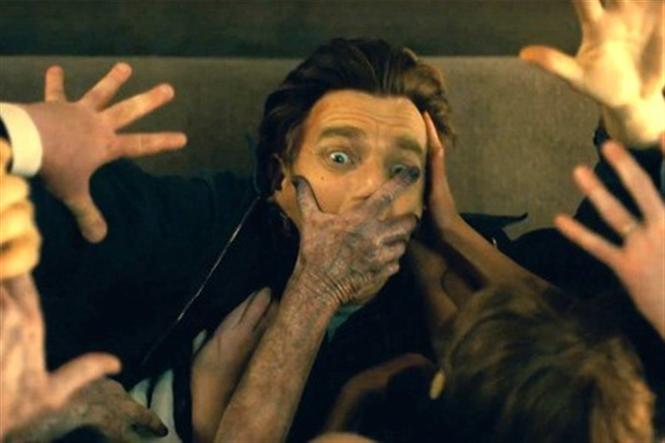 Doctor Sleep, touted to be the sequel to ‘The Shining’ is a psychological fantasy based horror film directed by Mike Flanagan. Coming across as a good versus evil movie with a lot of complications with respect to the screenplay, the film explores a lot of dark sides that children may face due to psychic minds. Does this experimental venture grip film fans?

The movie starts off with Dan Torrance’s troubled childhood due to the dark forces and shifts to reality which sees him battle these demons for a long time now. Simultaneously, there is Kyleigh as Abra, a young girl with the ‘shining’ and similar powers such as Dan Torrance. To add to this, we are also shown the dark community lead by Rebecca Ferguson (Rose), the evil dementor who consumes children’s shine in order to increase her lifespan. The entire film is about these three tracks that intersect at various points.

As for the casting, Ewan McGreor as Dan pulls off a terrific performance just as the kid Abra played by Kyleigh Curran. Be it their combination scenes or their chemistry through their mind voices, this duo works perfectly. But the show stealer happens to be Rebecca as Rose, the evil woman who snatches away children’s happiness with her dark deeds. Emily as Snakebite Andi is also impressive and adds a good flavour. A good casting equation overall!

The film Doctor Sleep has various fantasy elements that one must understand and get used to in order to get a hold of the content. It is similar to slow poison that grows onto you and there is a particular pattern in which the film has been cut that might seem confusing for a few. In fact, every scene has an intercut to another parallel event happening either with the other characters or with the past of the same character. This, after a point might seem a little monotonous. The idea is relatively new and some of the scenes are gripping in this aspect.

The mention worthy sequences of the picture would include the baseball match played by the young boy and a couple of scenes that eventually turn up after this game. The crux of the movie is based on this portion and this has been shouldered quite impressively by the makers. Another lovely sequence is the build up to how the characters meet and the shootout that has a nice emotional twist towards the end. One might think the last few minutes were a bit draggy and that Dan’s conversation with his dad could have been a lot shorter, In fact, we know exactly what would happen in the climax almost before the pre-climax block and this part could have had a tad bit more suspense.

Technically, Doctor Sleep is a brilliant piece of art as the visuals are a steal. Cinematography by Michael Fimognari is the biggest backbone as most scenes depend on the visual and performance. It seems so apt that a fantasy world was created for the negative characters and where they dwell. The edit work by Mike sure is challenging as there are numerous tracks to fill in between this run-time and he does a decent job. Music too adds value and Doctor Sleep seems abundant when it comes to its technical brilliance. If for a slightly crisper end and a less complicated proceeding right from the beginning, this could have well been a fantastic film overall.

Nevertheless, director Mike Flanagan does fair justice with Doctor Sleep and if you are an audience who is able to accept these psychic fantasy elements and dissolve in them, you would definitely enjoy multiple moments in the movie. Though there are not too many high points as such, the engagement is still there and there is a good level of suspense held together for a larger portion of Doctor Sleep.

Bottom-line: A well layered psychological fantasy, that is fairly intriguing!