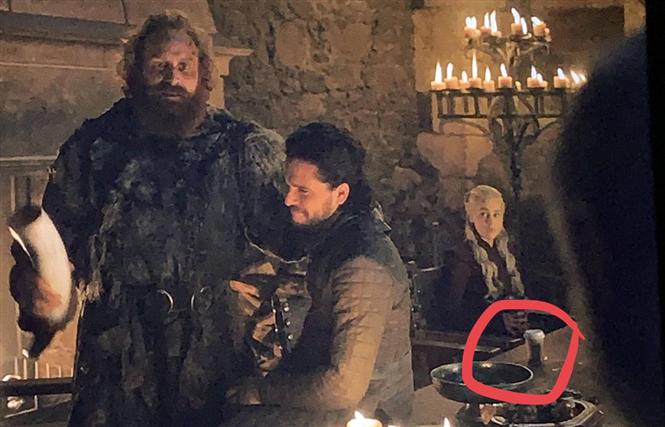 As Game of Thrones, a widely popular HBO series nears its end, issues seem to be cropping up for the period drama now more than the last 8 seasons. Following the brightness issue that came with the most anticipated episode of 'The Long Night' (so much so that viewers had to adjust their TV settings and rewatch the battle of winterfell), this week's episode aired a 'Starbucks' coffee cup sitting in front of Daenerys Targaryen.
Though the cup only appeared for a few seconds, the internet was quick to notice and troll the world out of those associated with the making.

Did someone forget their Starbucks? @GameOfThrones #GameofThrones pic.twitter.com/PjGLdq5u2h

You're telling me they had TWO YEARS to put together a decent show and they couldn't even spot the goddamn Starbucks cup in Winterfell??!?! #GameOfThrones pic.twitter.com/8opg7nyydv

Fun Fact: Starbucks was originally called “Starkbucks” and was founded shortly before the Battle of Winterfell #GameOfThrones pic.twitter.com/i66SZbixi4

For those of you who didn’t think the Starbucks cup gaffe was real, I went back to watch it and—#GameOfThrones pic.twitter.com/xNz2iBHySH

A Starbucks must always be in Winterfell.

I found where she got the Starbucks cup from #GameofThrones pic.twitter.com/cstnDTwnrV

This season alone #gameofthrones has:
1. used two different Dany wigs for the same scene
2. forgotten a starbucks cup on the table
3. referred to Gendry’s bastard surname as “Rivers” instead of “Waters”

guys this starbucks coffee fiasco isn't nearly as bad as the time Jaime had both his hands AND was holding a coffee a couple seasons ago #GameofThrones #DemThrones pic.twitter.com/FKaPVslxvO

HBO was quick to accept the mistake by jokingly issuing a statement that read, “the latte that appeared in the episode was a mistake. Daenerys had ordered an herbal tea" and Bernie Caulfield, an executive producer on Game of Thrones, commented, "if that’s the worst thing they’re finding, then we’re in good shape.”
Even Adobe jumped in on the fun tweeting:

And now HBO has ensured that the streaming versions of the episode and the re-aired versions do not show the cup in question. The said episode has also sparked a debate on Sansa Stark's line, "Without Littlefinger and Ramsay and the rest (her rapists), I would’ve stayed a little bird all my life.” with celebs like Jessica Chastain (known for speaking in favour of MeToo) taking objection to the context.

Rape is not a tool to make a character stronger. A woman doesn’t need to be victimized in order to become a butterfly. The #littlebird was always a Phoenix. Her prevailing strength is solely because of her. And her alone.#GameOfThrones pic.twitter.com/TVIyt8LYxI