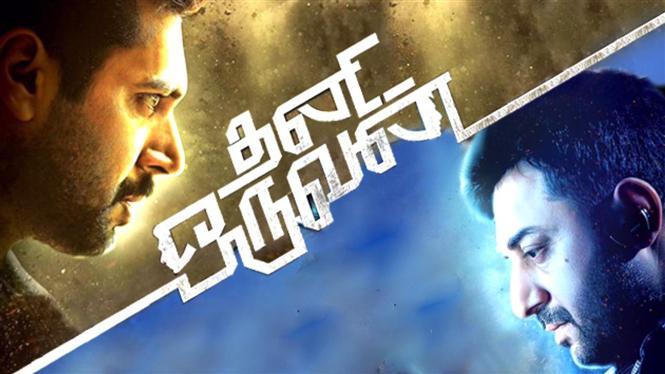 Jayam came out in 2003. 12 years does seem a fairly long enough period to be concentrating only on 'remakes' and 'inspirations'. With 'Thani Oruvan' director Raja turns a new leaf with a direct script for the first time.

A cat and mouse game between a hero who relishes the opportunity to decimate evil and an equally if not more powerful villain who is the embodiment of anything evil.

Jayam Ravi as 'Mithran IPS' is superb. This has got to be his best in a serious role since Peranmai. With innumerable cop movies that have hit the screens and with surely more to follow the protagonist of Thani Oruvan would stand the test of times and definitely find a place in the 'best league' of cop flicks in Tamil Cinema. And now to the USP of the film - Aravind Swamy. As the suave villain he breathes fire but with an ice cold expression. This has got to be one of the most well etched characters of a villain in commercial cinema and Aravind Swamy literally rocks it. Thambi Rammiah is riotous and it is so pleasing to see how much humour can be brought though subtlety.

The supporting cast including Nayanthara have done a neat job and this is one of those films where no actor or character looks out of place even if they appear for a minute.

The film has a sleek look to it thanks to Ramji. There is never anything overdone including the stunt sequences. Hiphop Tamizha would get noticed for the work, both with the songs and the BGM.

The first thing that 'Thani Oruvan' would do is relinquish the tag 'Remake Raja' from it's maker. While remaking films successfully is no mean feat 'Thani Oruvan' keeps asking us 'Why was this man only remaking all this while?'. The film has us glued right from the start when a teenager flummoxes a cunning politician. This sets the ball rolling and there is literally no stopping from there on.You would think that the teenager is the 'protagonist'. But it is not and most of the things about the film is a pleasant surprise like this. The title itself though defining the hero is as suitable for the antagonist too.Never in the film the two men who are at the opposite ends of the spectrum are made to look like fools to glorify the other. Each of them wins each battle by going one step ahead of the other. While you would guess that the war would be won by the hero this seesaw of results in the battles makes for exciting viewing. In a movie like this that is centred around two principal characters you are often subjected to crowd pleasing interchange of words between them. Thani Oruvan resorts to no such gimmick and all that that you get is rock solid and engaging cerebral battle between the two.The romance too is kept exactly at the threshold and the lone romantic number too is well placed,

Thani Oruvan marks the welcome of 'version 2' of director Raja. It is possibly the most rewarding experience you would have got from a mainstream Tamil actioner in the recent past.