In our Nanban preview analysis, we said there are three mandatory things that should happen for Nanban to become a Blockbuster...Did Nanban meet all these 3 criteria? Read on...

With sky high expectations to replicate '3 Idiots' success without deviating too much from the original while keeping the content fresh is a tight-rope walk for any director. Many directors may have failed by trying too hard or by playing too safe. Congratulations to Shankar, Vijay and rest of the team for successfully delivering big time on the promise. Nanban works just like the original and here a few key reasons why.

Nanban will be a genuine and undisputed comeback movie for Vijay. First and foremost reason for watching Nanban is Vijay. There were so many questions as to whether Vijay can justify the role of a brilliant maverick genius. Vijay will prove every one of his skeptics wrong through his mature performance in this movie. Vijay is completely natural and keeps the audience engaged throughout even when you know what is going to unfold on the screen. Vijay shows his tremendous acting potential after a long time without having to be loud. For example, one of the main highlights of the second half is the Jiiva's hospital sequence where Vijay single-handedly dominates the screen with his fantastic performance! Here is the actor people have been searching for so many year and thanks to Shankar for unearthing such a natural performer through Nanban. Probably, this is the first movie in his career where Vijay has no fight and this may also be the first movie where he has a real lip-to-lip kiss with Ileana shown in a very family friendly manner.

Shankar knows when he needs to play like Tendulkar and when he needs to be like Dravid. In Nanban, he does a Dravid by staying loyal to the original script without any insecurity. It is admirable to note that he doesn't feel the need to deviate from the original screenplay. Yet, at the same time he knows how to keep you engaged somehow. In the first half, the comparisons with the original was unavoidable in a few places. But, Shankar takes it to top gear during the second half and maintains till the end. This movie will make people realize how difficult it is to remake a classic.

Nanban is a clear example of team-work. With so many characters, it is difficult to say who did better than the others. Jiiva scores in every scene with his subtle performance and has great voice modulation. He plays an important role in making the chemistry between the friends work. Sathiyaraj brings his own style to enact the Virus role and doesn't remind you of Boman Irani. Big surprise is Sathiyan who is very believable in the Silencer role -- he comes across as the nerdy as well as able to pull off the key comedy scenes. It is an extremely smart casting decision by Shankar to have Sathiyan play this role. Srikanth's narration is effective. Srikanth is impressive in an important scene where he convinces his dad. Srikanth looks fresh and young. Ileana is cute in her limited role and brings the house down when she says "Avanaa nee". Her belly dance will be remembered. Even small characters like Anuya and SJ Suriya deliver exactly what is expected.

Madhan Karky deserves kudos for such great dialogues and lyrics. Dialogues are intelligent, simple and at the same time very impactful. Also, 'En frienda pola yaaru machan' during the beginning title card with rich picturization showing the friends reminiscing the past while driving through winding Ooty roads will pull the audience right in to the movie.

So, are there any downsides? just a few... Running length of 3 hours 7 minutes 52 seconds feels a bit stretched even though Shankar probably contributed only 12 minutes to it with a few set-up scenes for the additional 'Ileana' song. Purists may call it a speed-breaker. But, it is debatable since this may work out for certain section of audience who will enjoy Vijay's fast moves in the song. Another possible let-down is all the song picturizations including 'Asku Laska' feels low-budget compared to the usual Shankar standards.

People who watch this movie without knowing anything about the original will walk out of the theatre elated, rejuvenated and super-thrilled. There are a plenty of scenes that will be emotionally moving for the first time viewers. Even the viewers who have watched the original will find the movie worth watching.

Vijay stands tall even after giving so much space to so many casts and characters in the movie. Shankar is 100% correct when he said even people who doesn't like Vijay will like him after this movie.

Nanban is a must watch for all! 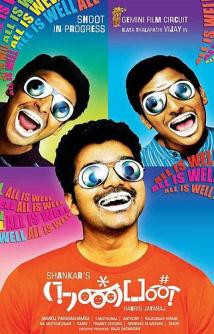