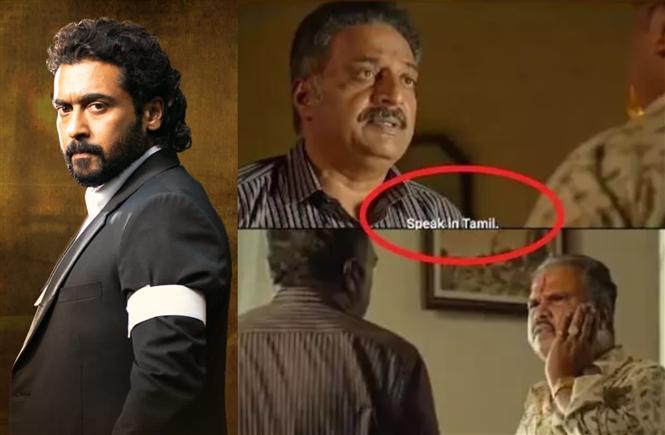 Actor Suriya's Jai Bhim which was a direct Amazon Prime Video release has been facing opposition to a particular scene, from a select Hindi speaking section of India. In the movie, actor Prakash Raj who plays an IG rank police officer slaps a non-native Tamil resident and asks him to speak in Tamil during one of his investigations. The scene which appears for mere seconds on screen created a furore online, from people who thought it was intended to humiliate North Indians.

However those who've watched the film would attest that the scene creates no such impression on viewers. A non-native pawn shop owner helps hide culprit of a real jewelry theft and during cross-examination he tries to dodge the questioning by speaking in Hindi. Prakash Raj's character who is fighting for the side on a time-limit, slaps the non-native character for him to spill the truth and fast.

Mr Rohit can’t u see this. It’s a film so see like film that’s it. It’s not about south north that’s it. All r Indians. Movies direct depending on there nativity that’s it. Then khan movie Chennai express shows South Indian like joker Wht about that tell me pic.twitter.com/2UZlU44QNA

Despite several explanations of this context out there and pointing out of a similar scene with languages reversed in Scam 1992 [A Hansal Mehta directed Sony Liv series], the movie Jai Bhim, which highlights the plight of scheduled tribes in India and Prakash Raj continue to receive flak.

Opened up on the slapping controversy of #JaiBheem and more. Do spend a few minutes to read and share… keep supporting relevant cinema .. love you all #JaiBheem https://t.co/THpZZYhzDY

In an attempt to not let this conversation overshadow the importance of the movie, Prakash Raj has now addressed the issue. He was quoted in a recent interview as stating,

"After watching a film like Jai Bhim, they did not see the agony of the tribal people, they did not see and feel terrible about the injustice, they saw only the slap..How else will a police officer who is investigating a case react when he knows that a person who knows the local language chooses to speak in Hindi to dodge questioning?

The film is set in the 1990s. If that character had Hindi imposed on him, he would have reacted this way only. Probably if it came across as more intense, it is also because that is my thought too, and I stand by that thought."