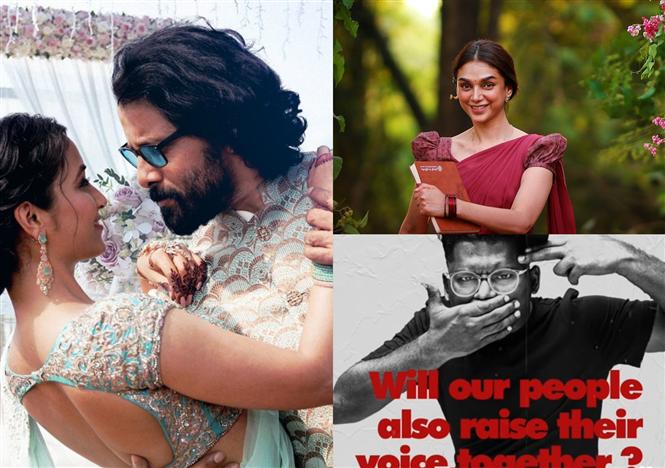 Cobra (Tamil): A R Rahman: Thumbi Thullalo: The celebratory wedding song starts with the myriad classical sounds with Asad Khan's Sitar paves way for the percussion sounds. The complex tune easily trumps the arrangements and Shreya Goshal aces the tune effortlessly and her vocals added more beauty to the tune with the improvisations when the lyrics flow as Thaniye or Thumbi Thullalo bit. Vivek's lyrics fall flat compared to the beautiful tune Rahman envisages while Nakul Abhyankar ably supports Shreya.

Sufiyum Sujatayum (Malayalam): M Jayachandran: Vathikkalu Vellaripravu: Jayachandran churn out a mind-bogglingly beautiful tune accompanied by a lovely assortment of exotic sounds. Nithya Mammen aces the tune and the second interlude played with Duduk is an absolute stunner. The Sufi tune undeniably adds another dimension to the overall soundscape. Sudeep Palanad composes Alhamdullilah and the lovely chant-like melody is peppered with once again middle Eastern arrangements which work to the song's favour.

Hashtag Justice (Tamil): Arivu: Arivu is one of the independent singers whose songs reflect the social injustice happening around us and questions them effectually with his lyrics. The mix of rap and hip-hop ensures that the song reverberates along with the youth listeners. Hashtag justice is also one of the song which talks about police brutality.

Ghibran Spiritual Series: Muthai Tharu, Om Namachivaya Om: Among the 4 singles released by Ghibran on the Spiritual series, Om Namachivaya Om and Muthai Tharu stand out. Ghibran is phenomenal with the Budapest Orchestra and though it can easily serve as a separate standalone track, punchy singing of the Muthai Tharu's tune by Ananthu make it a good listen. This track makes me revisit Pradeep Kumar's exemplary work in the Arunagiri Perumale album. In Om Namachivaya Om, the powerful tune rendered by Gold Devaraj and Ghibran is once again spot on with respect to the arrangements.

Bhanumathi and Ramakrishna (Telugu): Shravan Bharadwaj: Love-O Ishq-o Mix, Alavate Ledhemo: Shravan Bharadwaj is one of the few composers in Telugu who consistently delivers minimum guarantee soundtrack and this new OTT release also belongs to the same category. Though nothing extraordinary, cheerful vibe accompanied by lovely guitar solos in Love-O Ishq-O mix and hypnotic mix in Alavate Ledhemo works perfectly. Especially Hemachandra is splendid with respect to the vocals in the former song.

Friendship (Tamil): DM Udhayakumar: Superstar Anthem: The debut song for DM Udhayakumar has everything in the list to garner enough attention. Superstar anthem, Harbhajan Singh debut, Simbu to croon the anthem and Gowtham R's lyrics which is a mishmash of Rajini's iconic dialogues and film persona. Despite the questionable tune, these factors warrant a complete listen and the rock base to clasp the listener till the end.