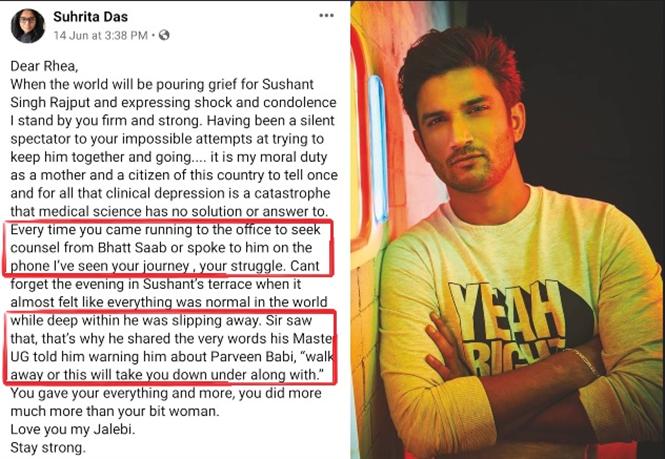 Over the course of reporting Bollywood actor Sushant Singh Rajput's demise, MovieCrow had pointed out how director Mahesh Bhatt had stated through his 'camp' that he had told Rhea Chakroborthy to leave Sushant owing to his mental health. The 'camp' we spoke about was writer Suhrita Das who right after Sushant's demise on June 14, 2020 had made a Facebook post, which was seen as an insensitive move by many.

Shame on people spreading images/videos. Shame on fake empaths.shame on media shoving mikes n camera. Mostly, shame on you Suhrita Sengupta. Ma’am, for the sake of people he left behind, don’t make this into some dramatic bolly drama for your benefit.

Suhrita Sengupta/Das is a writer with Vishesh Films, a production company founded by Mahesh Bhatt and run by him, his younger brother Mukesh Bhatt and Mukesh Bhatt's son Vishesh Bhatt. Murkily, Mukesh Bhatt who has never worked with Sushant Singh Rajput before was also one of the first Bollywood celebs to go infront of media news channels commenting on his mental health as soon as the news of the actor's demise broke out.

[By Mukesh Bhatt's own admission in these media appearances, he did not know Sushanth that well and made it abundantly clear that he was neither a well wisher nor a friend].

Wow this is insane. People cannot have respect for the departed soul. They can slander not only living but departed souls too. This is too shameful to call intellect soul a ‘very disturbed soul’. Where is Humanity @shekharkapur @BajpayeeManoj. Please do something

+ C. With "freedom of choice" , "individual freedom" arsenals in abundance , you can " LOCK " your profile in " Social " media , STILL show complete reluctance to unlock the mind of a locked & lonely soul that the MANIPULATIVE BOLLYWOOD SOCIETY had great pleasure in CAGING. +

The now-deleted Facebook post has gone viral among those who are demanding a CBI enquiry into Sushant's death as they suspect foul play in the matter.

The foul play stems from several factors such as the lack of a suicide note, media branding Sushant's death a suicide even before postmortem, the Bhatts' voluntary involvement in the narrative about the actor's mental health, Sushant's cook (one of the 27 people to be interrogated so far) retracting his original statement, mysterious activities on Sushanth's Instagram handle among other things.

@SuhritaDas "He was slipping away" !!! Stop being someone's puppet and stop comparing #SushantSingRajput to #ParveenBabi . Who the fuck are you to start defending Mr Bhatt and and what the fuck you know about #SushantSingRajput . Better shut your shitty mouth!!!!

@SuhritaDas It's from your office that his health status leaked and spread like wildfire within the industry making him lose work?

So apparently she knew that Sushant was
'slipping away' as Suhrita das has mentioned in her post but as Sushant's 'friend' she did NOT even care to inform his family that Sushant could be suicidal! Waah..what a wonderful girlfriend/friend !👏#rheality #RheaChakraborty

Wth is happening @MumbaiPolice, who is operating Sushant's phone ??