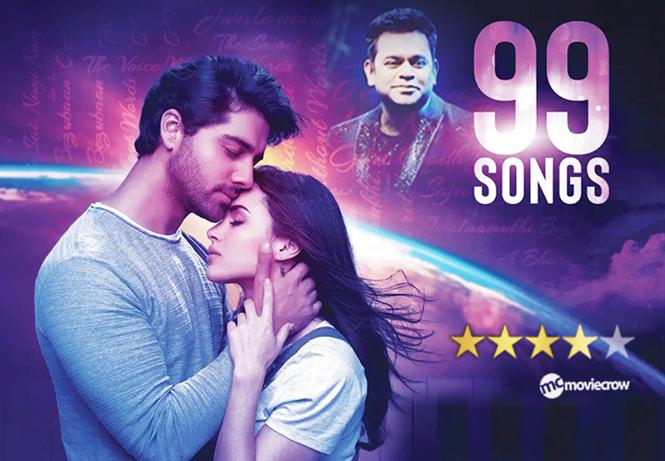 99 Songs is an upcoming Hindi language musical romance film directed by Vishwesh Krishnamoorthy and Co-written and produced by Rahman. The soundtrack is composed by Rahman himself and it is one of the albums which was in the pipeline for many years. Rahman easily wins in the soundtrack with 14 tracks loaded with a rich variety of enjoyable tunes.

O Aashiqa/Sofia: Shashwat Singh appears to be the lead singer of 99 songs featuring in 6 songs and Rahman gives him some of the best songs in the soundtrack. O Aashiqa and Sofia surely will feature in the top songs of the soundtrack. In O Aashiqa, Rahman has woven the melody beautifully using the key chanting phrase Oh Jiya Toh Oh Jiya. Shashwat Singh is in stellar form and the track reaches crescendo around 3 minutes mark with the chorus pitching in along with the lead singer's high pitched rendition. Rahman segues Sai Shirdi song in the middle of the song.

Sofia is a lush melody which starts in a gentle manner backed by Keba Jeremiah's wonderful guitar strums. The gentle flute strains and the breezy melody paves way for the kick-ass vocal harmonies by Arjun Chandy towards the end giving the terrific finish to this beautiful song.

Sai Shirdi Sai/O Mera Chand: Rahman uses the Sai Shirdi Sai song which he released for the new year last year and the serene tune is delivered exceptionally by Bela Shende. Though the tune is not effectual as a standalone, Rahman adorns the track with the effectual arrangements led by Sai Saravanam's Tabla and Kareem Kamalakkar's flute. Bela Shende outscores herself with the effective lullaby O Mera Chand and the tune though relatively treads along the familiar territory, the serene feel provided by the tune is a blissful one. Rahman blends Sai Sai chorus with this track also and the lovely flute in the arrangements will definitely calm the listener's mind.

Nayi Nayi/Veere Kadh de : Nayi Nayi is the fast-paced song in the album but the track is more generic pop song material single-handedly prodded by Shashwat singh. The arrangements are strictly confined to the hard rock genre with the brief lovely Tabla cameo in the middle of the track. Another fast-paced track is Veere Kadh de with the uncanny Maaro Maaro vibes with the percussions in the prelude. Though the rap by thoughtsfornow didn't work as expected, the track is an interesting attempt by the composer despite the multiple elements of the track didn't blend well as expected.

Humnawaa: Shashaa Tirupati enters the show with the two tracks Humnawaa and Soja Soja. The former is the lovely melody and the terrific arrangements by Rahman outscore the main melody especially the lovely interplay between Shashaa Tirupati's humming and the piano. The track definitely warrants multiple listen especially for the brilliance displayed by Rahman with the background piano score. Armaan Malik delivers the melody part adequately well.

Soja Soja: Shashaa Tirupati's riotous singing in Soja Soja is definitely the highlight of this fun track and she sounds like Rekha Baradwaj especially with the phrase Raat Hogayi. Rahman once again wins over with the jazzy arrangements with the terrific mix of piano and the brass ensemble. Rahman peppered the song with the glass opening sounds and Shashaa Tirupati effectually shifts the tone between whispery vocals and thunderous blast aided by the wonderful brass sounds.

Jwalamukhi (Male/Female version) : Contrary to popular opinion, Jwalamukhi is one of the weak songs of the album despite featuring Arijit Singh in the lead vocals, the tune is pretty much standard material with nothing excites much and Arijit's vocals falls flat. The track's female version crooned by Poorvi Koutish fares better especially because of the punchy rendition in contrast with Arijit's sombre rendition. Rahman props up the background too with the electronic synth soundscape.

Teri Nazaar : is the lovely throwback from Rahman's early days especially sounds more like Gowarikar's collaboration. Though the track has nothing extraordinary to offer, the tune is highly enjoyable for its nostalgic factor and Shashwat Singh's rendition.

Gori Godh Bari: The album's other highlight is the delightful classical track Gori Godh Bari and without any doubt, the three leading singers Alka yagnik, Anuradha Sriram and Shweta Mohan behind the mic are the star of this lovely tune. Rahman adorns the tune with the rich classical sounds of Sarod, Sitar and Tabla.

Voice without words/The Oracle: Going by the title Voice without words, one thought that may be instrumental but the whispery words of Poorva Koutish are packed with the hypnotic arrangements. But Rahman ends the whopping 14 song soundtrack with The Oracle which starts with the gentle piano keys before Kareem Kamalakkar's flute gives company to the lovely piano setup by the Rahman himself.

Bottomline: 99 songs is Rahman's thoroughly immersive diverse soundtrack in Bollywood after a long time. The whopping 14 song soundtrack is a nostalgic blend of good old Rahman melodies as well as composer leaves his own touch backed by an exceptional set of singers.