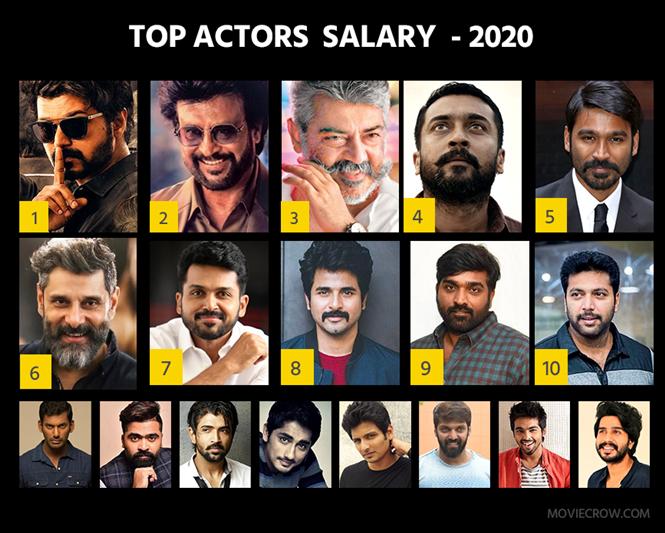 For 4 straight decades, Rajinikanth has been continuously occupying the number 1 spot in terms of box office collections and opening in Tamil cinema. This is a record that no other hero in any other language could even imagine achieving it. Rajinikanth has been the box office king despite so many changes during the last 40 years. The year 2020 began with a surprising change in the top order. Vijay has moved up to the number one slot after the phenomenal reach and success of Bigil and other recent movies. After verifying with a number of box office sources and production houses, the following actors’ salaries have been ranked for 2020.

Vijay had a meteoric rise due to his selection of movies recently. Vijay quickly scaled up from ₹25 crore in Mersal to ₹35 crore for Sarkar and shy of ₹50 crore for Bigil. After the solid box office performance of Bigil, Vijay is said to have crossed ₹60 crore for his next movie following Master. Vijay's distribution rights for Tamil Nadu is continuously fetching ₹65 crore+ share. The recent market expansion is fueled by solid box office pull in AP/TG, Kerala, and a major breakthrough in overseas territories such as the USA.

Superstar Rajinikanth reached the peak for a brief period when he received ₹100 crore as salary for Darbar, almost 30% higher than that of Petta. Darbar was distributed for ₹64 crore and collected a share of ₹42 crore in Tamil Nadu. The word is that Sun Pictures had offered Rajini to pay the exact match for TN distribution rights that they will be able to sell. Currently, the distribution sources estimate that TN rights will not sell for more than ₹55 crore, assuming Darbar issues are amicably settled by then.

Ajith is said to be under contract with Boney Kapoor for a three-film deal on an average fetching ₹40 crore for each film. Ajith, who has been toe-to-toe with Vijay's salary during the last 20 years, is expected to command ₹45 crore or more depending on his next box office collection.

Suriya has a predictable steady family audience assuring steady collection for 2 weeks in Tamil Nadu and Kerala. However, Suriya has significantly lost his AP/TG and overseas market, which in turn is putting tremendous pressure on his remuneration. The actor is firmly holding steady at ₹25 crore during the last 8 years. As a result, Suriya is committing to act more for his home production house to sustain the salary level.

This is the first time Dhanush has entered the top 5 rankings. Due to the fantastic box office performance of Asuran and moderate collection of Pattas, Dhanush has expanded his BO pull with a salary of ₹14 crore. Dhanush continues to experiment while expanding his box office.

Vikram has been holding on to ₹10 crore salary for more than a decade now. With the AP/TG market almost drying out, Vikram is focused on challenging roles and creative satisfaction. He is also encashing on years of goodwill he built in the industry to lay the foundation for his son's career. Vikram's priorities have changed and “Chiyaan” is not compelled to drop his salary for signing more projects.

Karthi made his entry into the 100 Crore Club for the first time with Kaithi against the tough competition from Bigil. However, Thambi didn't build on the success of Kaithi. Karthi's salary is not transparent since he has acted only for his home production houses ever since he entered the market. Based on the box office pull, outside producers will not hesitate to pay ₹8 crore.

Sivakarthikeyan, who quickly rose to top 5 heroes zooming into 10 crore+ club has slid-back again after the middling BO performance of his recent movies with Namma Veetu Pillai providing a respite. Sivakarthikeyan's strong base with family and children have been feeling some shakiness after below-average BO openings of Hero, Mr. Local, and Seema Raja.

Jayam Ravi has been making slow and steady progress in recent years with content-focused script selection. His recent blockbuster, Comali, proved his ability to stand tall without relying on his brother's direction or a co-star as seen in Thani Oruvan. Jayam Ravi has moved up to ₹8 crore as he continues to experiment a bit in a strictly commercial format.

A notable omission in the top 10 list is Kamal Haasan, who is busy with Indian 2, anchoring for Bigg Boss and his big political ambitions. Technically, Thoongaa Vaanam was the last movie he had acted and ghost-directed for a combined remuneration of ₹30 crore. The producers are not ready to pay more than ₹20 crore and Kamal Haasan is not willing to act if he is not paid above ₹30 crore.

Vishal and STR (Simbu) are hovering around ₹5 crore. Vishal acts in his home production guarding his salary. STR (Simbu) is forever mired in controversies. Thanks to STR's loyal fan base, he still manages to generate some buzz at the time of his movie releases.

Jiiva, Arya, Siddharth and GV Prakash are charging under ₹2 crore. Jiiva is showing some revival through his upcoming movies, notably the well-marketed 83.

Arun Vijay under 2 Crores bracket is fast becoming a safe bet for medium budget directors. He delivered solid performances in Thadam, Kuttram 23 and Chekka Chivantha Vaanam. Arun Vijay's Mafia under the direction of Karthick Naren is one of the eagerly awaited movies of 2020.

The ego-less star, Arya, delivered a solid performance in Magamuni and held his own in a multi-starrer, Kaappaan. GV Prakash and Siddharth delivered a sleeper hit in Sivappu Manjal Pachai. Their recent outings have struggled. Vishnu Vishal, who draws ₹1 crore, delivered one of the biggest hits of 2018, Ratsasan. He is charting a determined comeback recovering from his injuries and personal issues.