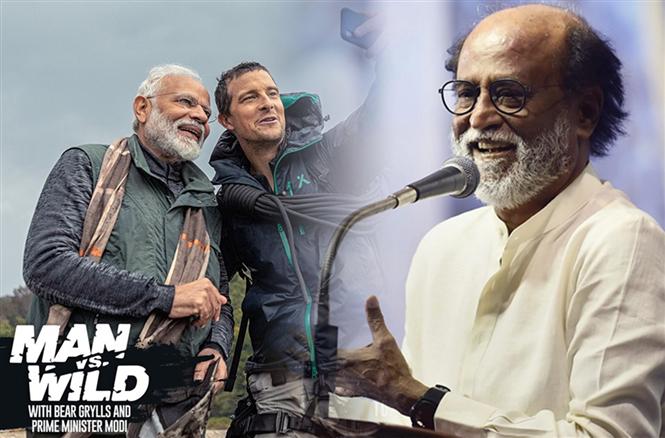 Latest word of interest surrounding Rajinikanth is his alleged appearance on Discovery channel's Man Vs Wild programme, where the Superstar is to be seen walking the wilderness of Bandipur forest in Karnataka with the show's host Bear Grylls.

Any other star or any other show, it would have been viewed as just another Indian act on an international show, but given's Rajini's proclivity to the ruling BJP party, many are seeing it as 'Rajini' following Prime Minister Narendra Modi's 'footsteps'.

The reason for this being in 2019, when India was facing a crisis with Kashmir [Modi imposed direct rule over the disputed region], the PM was busy airing his Man Vs Wild stunt from Uttarakhand’s Jim Corbett National Park.

While the episode was critiziced by many as a 'reckless distraction/propaganda' during times of duress, Rajinikanth's shooting for the same team right after the controversial CAA/NRC bill passing has raised a lot of eyebrows.

Also, Rajinikanth is expected to enter into full-fledged politics starting with the Tamil Nadu Assembly elections in 2021 and this supposed Discovery Channel appearance [Rajinikanth has already been confirmed to have travelled to Mysore for the same] of the actor has left many wondering if he is hinting at confirming his political affiliations in the future.