Theatre business in TN witnesses a boom in the past 50+ days! 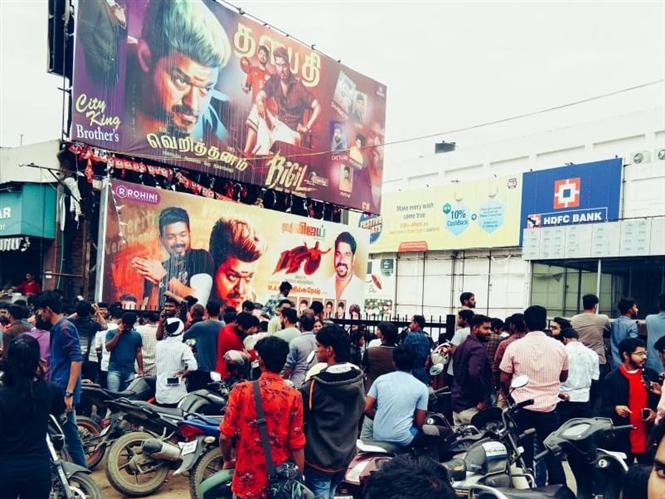 After the success of Ajith’s Nerkonda Paarvai and Jayam Ravi’s Comali in August, there has been a dry spell at the box office. The much-awaited biggie ‘Saaho’ which hit the screens on August 31 failed to impress the audience. The market faced a major crisis as footfalls across Tamil Nadu declined.

Due to the over-hype and sky-high expectations riding on Prabhas’ film, many prominent film releases scheduled at the time were postponed giving way for Saaho to enjoy 2 weeks undisputed run at the Box office. Since the film failed to rake in the moolah, theatres were sadly empty with a sharp decline in footfalls. Films like Magamuni, Sivappu Manjal  Pachal and Oththa Seruppu Size 7 ended as average / above average grossers but failed to bring in audience in large numbers.

The theatre business in TN has witnessed a big boom in the past 2 months. The dry spell ended with the release of Suriya’s Kaappaan which hit the screens on September 20 followed by Siva Karthiekeyan’s Namma Veetu Pillai on September 27 and Dhanush’s Asuran on October 4. Kaappaan had a good run in its first week, while NVP registered a strong hold and raked in big numbers than Suriya starrer at the TN Box Office. Asuran directed by Vetrimaaran has emerged as a surprise package at the box office. The film has turned out to be a very profitable venture for the producer and distributors.

Vijay’s Bigil and Karthi’s Kaithi which hit the screens for Diwali turned out to be huge money spinners. These two films also brought back the family audiences to cinemas and worked in the trade’s favour. Bigil and Kaithi have stepped into the fourth week and are continuing their run despite new releases this week.

Vishal’s ‘Action’ and Vijay Sethupathi’s ‘Sanga Thamizhan’ which hit the screens on November 15 / 16 respectively have opened to mixed reviews. Looking ahead, Dhruv Vikram’s debut film Aditya Varma (Nov 22) and Dhanush’s ENPT (Nov 29) are lined up for release this month. Whether these films will continue to make the exhibitors happy largely depends on the film’s content and reception of the audience which will decide the fate of the film.