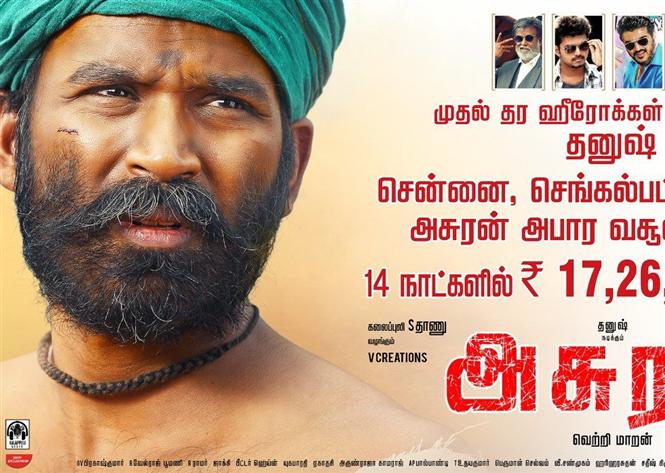 Asuran starring Dhanush and Manju Warrier in the lead roles directed by Vetrimaaran released worldwide on October 4. The film received rave reviews from critics and audience from across the globe. The excellent reviews and strong word-of-mouth publicity has stirred up the film's collections to a great extent.

The film has grossed around Rs. 65+ cr worldwide and has raked in Rs. 46 cr in home state TamilNadu. The movie reportedly grossed over Rs 100 crore from India domestic theatrical, overseas, satellite, digital and audio alone. Producer S Thanu has officially revealed the box office figures of Asuran in Chennai and Chengalpattu area through a newspaper ad. The film has grossed Rs. 17,26,28,764.80 (Rs. 17+ cr) in 14 days.

Dhanush has joined the big league of actors like Rajinikanth, Ajith and Vijay as the film has made humongous collections in these regions on par with Tier 1 actors. Producer S Thanu has to appreciated for revealing the exact box office figures of the film in these areas, as there is no transparency in box office numbers otherwise, due to lack of a proper tracking system in the state.

The 'blockbuster' film has now released on OTT platform Amazon Prime but is still running in few theatres. Despite two big films, Vijay’s Bigil and Karthi’s Kaithi, releasing for the Deepavali weekend and occupying most of the screens in the city, Asuran has managed to continue its theatrical run and underlines the point that 'content is king' in pulling large crowds to theatres.