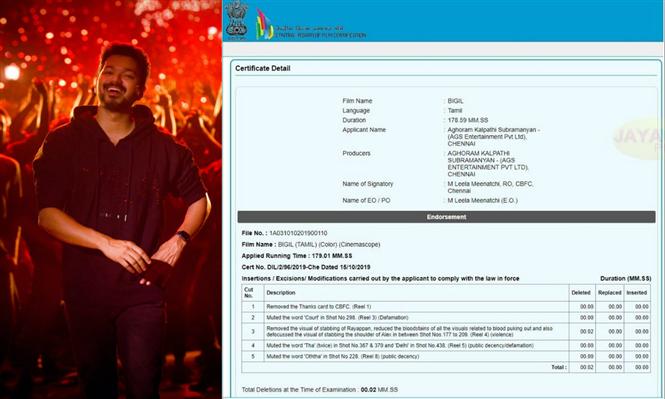 Vijay's Bigil has completed the censor formalities and has been awarded 'U/A' certificate. The run time of the film is nearly 3 hours (2 Hours 58 Minutes 59 Seconds). The film received no cuts from the censor board. However 3 words have been muted and a scene has been deleted due to violent content.

Bigil starring Vijay, Nayanthara, Jackie Shroff, Yogi Babu, Kathir, Vivek and Indhuja Ravichandran in the lead roles is directed by Atlee. The sports film is gearing up for Diwali release and is expected to hit the screens on October 25. However an official announcement is awaited on the exact release date. Produced by AGS Entertainment, Bigil has music by A.R. Rahman.

Karthi's Kaithi directed by Lokesh Kanagaraj is also slated for Diwali release. The film has completed its censor formalities as well.