No Shah should make us give up our language: Kamal Haasan's bold attack on Home Minister's Hindi Imposition! 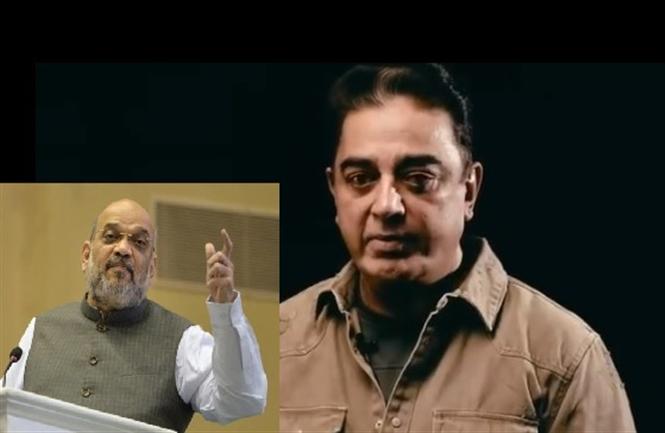 On Saturday, Home Minister Amit Shah took the occasion of Hindi Diwas and said that it is necessary to have one language aka Hindi as the National link, which could represent India in the world. This re-opened the 'Hindi imposition' Pandora box among social debates across the country, bringing back tags such as #HindiIsNotMyLanguage on social media.

Tamil actor,politician Kamal Haasan on Monday launched an attack on the Home Minister for suggesting Hindi to be made the common language of the country and said, "India was formed when many rulers decided to give up their Kingdom to form one nation; however the one thing many Indians from different states had stressed on not giving up was their language and culture. When Indian became republic in 1950, the government promised the same to the people. No Shah (Amit Shah) or Sultan or Samrat should try and change that promise all of a sudden."

Kamal then goes on to remind Shah of the revolutionary Jallikattu protests that took place in Tamil Nadu and said, "Jallikattu was a small protest and a small victory (for Tamil Nadu). If we (Tamilians) start fighting for our language then it will be much bigger (than Jallikattu)..That kind of consequence is unnecessary for India or Tamil Nadu."

Speaking about the acceptance of India's National Anthem despite it being in Bengali, only one of the twenty two official languages of India, Kamal said, "Most of the Indians do not sing their own National Anthem in their language, except for Bengalis. Despite this, we have been singing the song happily and will continue to do so because the poet who wrote it gave the due respect and recognition to every language and culture (of the country)."

Haasan concluded, "India is a fantastic feast. Let us all come together and eat. If you try and shove it down our throats, it won't stay in for long. Kindly do not do that (impose). We can view unity in diversity.." The message was posted via a video which was captioned, "You (Amit Shah) are compelled to prove that India is still a free country. When new plans or laws are enacted, it should be consulted with the public. The expulsion of the white men (The British) was not for empty men, but for democracy"