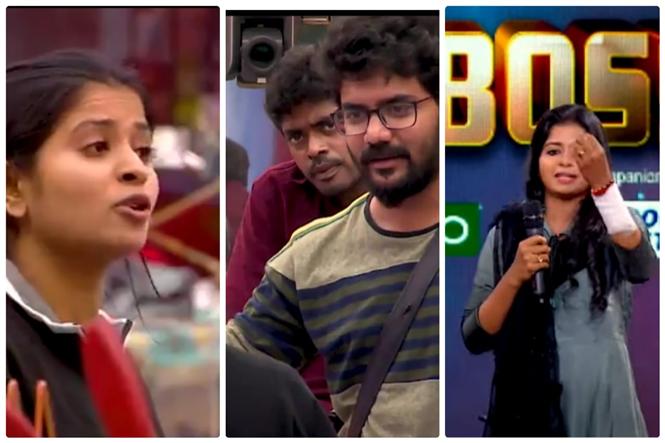 Bigg Boss Tamil Season 3 happens to be ruling the prime hours of satellite channels and more than all, has become 24/7 topic of debate and discussions including trolls and memes on social media and online platforms. While it has become a drama of fun, emotions, drama and controversies, what’s more puzzling is some of the so-called drawbacks of the show, which has left audiences directionless. Especially, the last night show has paved way for discussion on many topics, which looks pretty reasonable.

This happened to be the first ever question with the last night episode of Bigg Boss as Madhumitha’s eviction was announced directly in the Audi with Kamal Haasan bidding adieu to her. The conversation with house mates through Agam TV, where we could easily sense things haven’t gone down well even with Cheran and Kasthuri, whom Madhu preferred to talk with. Especially, Cheran’s opinion about Madhumitha’s shocking act could be easily witnessed through his statement and Kasthuri was offering just a bleak consolation with other house mates not even saying a single word and Vanitha pulling the legs of Madhu. All these instances gave a deep thinking to question what all happened and viewers were curious enough to see it telecasted only to get disappointed. Yes, there was a lot of Time Jump, where the events on Friday without Madhumitha were shown and this the regular show viewers confused and disappointed.

This happened to be yet another surprising and shocking factor of last night show. It has even raised a strong question – Are we really seeing what’s happening inside the house or what the program producers want to show? Well, this could be having both positive and negative impact on the participants. Say for instance, Bigg Boss Tamil happens to be the only version, where we don’t see the participants smoking as the producers have felt that it could have a bad impact on the viewers. In fact, in one of the previous seasons, Kamal Haasan had pointed out this to one of the contestants saying that they are intentionally not showing the other side of the contestants inside the house as it will definitely ruin their image in public. While this could be regarded as a commendable act, the two incidents from last night leave us yet again puzzled. One was when Kasthoori pointed the mistakes of Kavin, Sandy, Mugen and Tharshan, Vanitha interrupted saying that when Kasthoori slipped into the swimming pool accidentally, they were the first to save her without any second thoughts. It was the same when Sandy showed his wrist, where the plaster used for glucose drips was seen. Why did these visuals go missing? This actually lets us question if this was done to show these boys in bad light.

Every time when it’s time for eviction, Kamal Haasan says how important voting is and how the people should utilize it efficiently. However, when taking the above mentioned instances into the reality, where the viewers aren’t shown the real picture, it eventually influences them in a wrong way, isn’t it?

Are the rumours getting substantially proved to be true?

Finally, this seems to be getting viewers serious-minded about the show. Naturally, when a show is on the peak of sensation it obviously comes with appreciations and rumours as well. We have come across several such topics, which includes the recent one that Mugen slapped Vanitha during the heated arguments, which didn’t create sensation as those visuals couldn’t be seen anywhere.

However, with pre-exit of Madhumitha completely hidden, there was a buzz stating that it all started when a topic was given to discuss, which actually shifted the direction towards a communal issue (Karnataka-Tamil Nadu) thereby stirring up everyone inside the house against Madhumitha’s statement, which the viewers believe could have urged her to take this decision. Similarly, there are already rumours spreading out that Abhirami is tonight’s eviction.