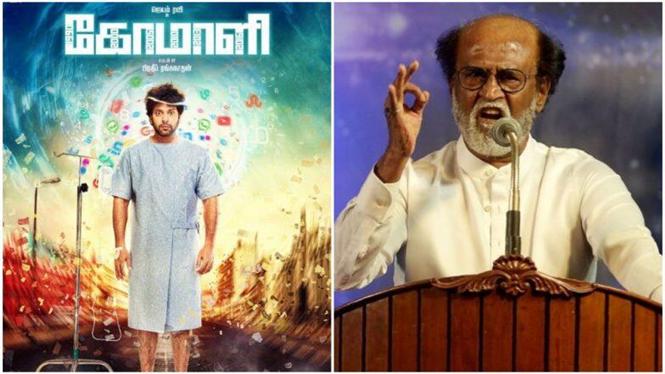 A particular scene from Jayam Ravi starrer Comali that was construed as a troll on Rajinikanth's political stance seemingly remains un-deleted in overseas prints of the movie, despite it was promised to be removed by the team.  It is worth mentioning here that this scene had Comali in troubled waters at the time of its trailer release, because it didn’t go down well with certain groups.

Jayam Ravi, producer Dr. Ishari K Ganesh and director Pradeep Ranganathan had even openly admitted of removing the respective scene, though Rajinikanth himself is reported to have not taken it seriously.

Accordingly, the scene was replaced with a visual featuring Nanjil Sampath and it even flashed a text that read, ‘Rajinikanth’s scene from Comali has been removed’. However, some of the audiences who have watched the film overseas have mentioned that Rajinikanth’s scene remains un-removed.

2nd half, fun quotient was overruled by the preachy tone.

The controversial Rajini Scene was shown in the movie here in USA #Comali After long time #YogiBabu gets a good role. He shines in emotional scenes as well.