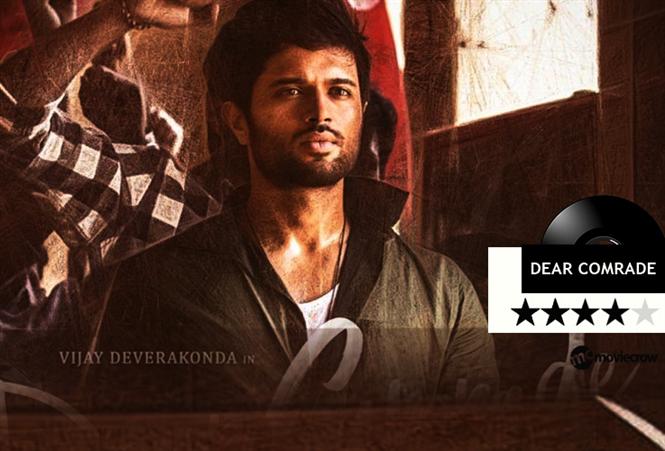 The sensational film that's on the line for release.. DEAR COMRADE, starring Vijay Devarakonda & Rashmika Mandanna.. coming out in all 4 predominant South-Indian languages is what you call as packaging! The soundtrack by Justin Prabhakaran is a solid example of being genuine to the film's pulse yet staying connected to the moodscape and mainstream mindset of the cultures it reach out to. The tracks flow beyond the limits of being just a dubbed soundtrack and hit a true chord in its listener's heart!

Comrade Anthem.. An adrenaline rushing number starts with Vijay Sethupathi calling in all the comrades out there. The number has been sung by Devarakonda himself in Telugu and Dulquer in Malayalam. The track blends tapping beats with rap by Stony Psyko and Dope Daddy. The hook chorus humm keeps hearing within our head even after the song ends.

Azhaippaayaa.. Written and sung by Justin Prabhakaran himself is a yearning melody of someone waiting for that one call! 'Tholai dhooram thedinen.. Thodum dhooram aagida..' shines a line! The free flowing song has a indie groove to it with Justin then and there flirting with the renditions. The violins beneath along with the orchestrations pages a new turn. What flows like a travel number, suddenly glitters in a spark of poetry like 'Theeraadha valigalile sugamtheda kilambugiren.. Peranbe yerkkum kobangalai!'.

Aagaasa veedu kattum.. My personal favorite of the album! Written by Karthik Netha and sung by Gowtham Bharadwaj, the number dances to a subtle jathi of a carnatic rhythm. 'Mennaambal punnagaiyin peranbile.. Vinmeenil veededuppen indre!'.. something that reminds you of vintage, 90s works of Vairamuthu and Rahman.. those during Kaadhalan days! One of those rare melodies that come alive and unpolluted amidst all that noise that's been churned out to us these days!

Naan varuven.. Written by Mohan Rajan & sung by Sathya Prakash, Aishwarya Ravichandran.. the number is a hope call for the cause that the film believes in.. Love! The Kerala chande beats that interludes before the female rendition begins.. The chorus part that hook a flashy montage vibe.. The melody within.. The track promises us to work much better with visuals onscreen.

Dosthe Takkaru.. Sung by Naresh Iyer (how good is to listen to him after a longgg while!).. the number is a fun anthem celebrating friendship. Viveka writes funnily where he compares friendship being tuckeru with liquor. The marriage beats that gallop in the middle crazily lands on a melodic stanza before it turns into a whistle-worthy dance track again. The folkish touch all along like 'Konda potta ponnukkaaga.. Sanda pottu settu serndha.. Rendaamkattaan vayasu marakkaadhu!' does throw a smile on us as the song closes crazily on heavy-on dappaankoothu!

Gira Gira.. Probably, the most interesting song of the album.. sung by Nakul Abhyankar and Mohana Bhogaraju, written by Karthik Netha.. is a marriage song. 'Gira Giravena thirugura uralaa.. Edakka valakkaa odura.. Vedhaiya araikka paakkura' is interesting assemble of imageries and words. The melodic male rendition that follows is a beauty and it works more as it comes next to the solid, daunchy vocals by Mohana. The song totally outdoes the genre / tagline and swiftly flows around.

Canteen Song.. The single-shot number that's already viral enough is sung by Nivas K Prasanna. One that talks about all that gossips that goes around in the air of a college campus is quirkly written by Justin himself. Funny truths get outspoken like 'Collegeil arrear mama.. Loveula passaagi poraanga mama..'. Nivas's rendition gobbles youth! WIth just a chuckle of spoon tickling a teaglass, the number drops on final pettarappish dance beat!

Bottomline: 'Dear Comrade', scored by Justin Prabhakaran is easily one of the most interesting and entertaining soundtracks of the year. The range of the album comprising every emotions stretching from love to rage.. gets solidly shaded through its music, brilliant lyrics and some amazing renditions.