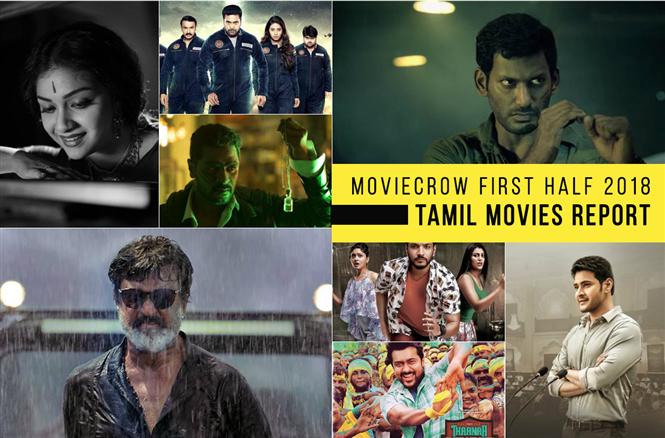 According to trade pundits, the first half of 2018 has been the most disastrous period for Tamil cinema in recent years. There were no new releases for 7 straight weeks due to the TFPC strike, which led to a revenue loss of around ₹200 crore for the industry. Also, good movies were scarce, which further brought down the enthusiasm of moviegoers.

MovieCrow’s Picks from the First Half of 2018

A disappointing start to the year

Vikram’s Sketch and Suriya’s Thaanaa Serndha Koottam, which released during this year’s first festive release date (Pongal), failed to set the box office on fire. In fact, the entire first quarter was a very dry spell with only two movies (Kalakalappu 2 and Naachiyar) managing to become profitable for the stakeholders.

Santhosh P. Jayakumar’s adult comedy film, Iruttu Araiyil Murattu Kuththu and Vishal’s Irumbu Thirai managed to bring back audience to the theatres after a long hiatus due to TFPC strike. In spite of its flaws, Jayam’s Ravi’s Tik Tik Tik, touted as India’s first space film, was lapped up by the audience for its unique experience. These were the only 3 hit films in the first half of this year, which is probably an all-time low record in Tamil cinema.

Similar to Rajinikanth- Pa. Ranjith duo’s earlier film Kabali, Kaala also opened to mixed response from the audience. The buzz and advance bookings were unusually low for a Superstar film due to various reasons, one of which is Rajinikanth’s political ideologies not matching the ones he conveys in the film. However, the movie kept the cash register ringing in Chennai and entered the all-time top 5 grosser list. The movie turned out to be profitable for the producers as it was made at a reasonable cost and good earnings coming from pre-sales of satellite and other rights.

Vikram Prabhu’s Pakka was the most slammed movie in the first half of 2018. The amateurish screenplay and performances were severely criticized by the critics and audiences alike.