The first look teaser of Nadodigal2 has been release by Suriya on his Twitter account. The film is a sequel to critically acclaimed Nadodigal which released in 2009. Samuthrakani is helming the sequel too. The film stars Sasikumar, Anjali and Atulya Ravi in the lead roles. Samuthrakani plays a pivotal role in the film. The other cast members include Bharani, MS Bhaskar, Super Subburayan, Ramadoss and Sriranjani. Music is by Justin Prabhakaran. The movie is produced by Madras Enterprises S Nanthagopal. 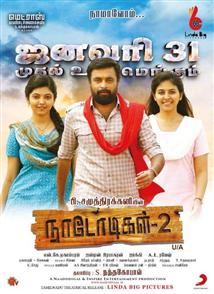