It is going to be a busy weekend for movie buffs at K-town this week as two directors are making their debut in Tamil. Charulatha and Saattai will release this Friday as Naduvula Konjam Paakkatha Kaanom pulled out during last minute due to lack of screens. Encouraged by extremely positive response during press show, Naduvula Konjam Pakkatha Kaanom decided to postpone their release so they can get better screens and ensure they don't get crushed by competition. Smart Move.

Charulatha, directed by Pon Kumaran, is the official remake of Thai horror film ‘Alone’. Priyamani plays the roles of conjoined twins and it is the story about a jealous twin taking revenge over the other after their separation. It would be interesting to see how they adapt ‘Alone’ for the Tamil audience. Priyamani is expected to have delivered a stunning performance as the entire film rests on her shoulders. Around 420 CG shots have gone into the film. The film is distributed by Hansraj Saxena’s Sax Pictures and music score by Sundar C Babu.

Saattai has Samuthirakani in a prominent role and the story revolves around a school, its teachers and students. Directed by newcomer Anbazhagan, the movie is expected to convey a social message subtly. One might be curious to know how different the message will be from ‘Dhoni’ and 'Nanban'. ‘Sahaayane’ track, sung by Shreya Ghoshal has been topping the charts for some time now. Imman has scored the music for this film and Camera by Jeevan.

USP : Saattai carries a strong message about the education system and produced by Prabhu Solomon of 'Myna' fame 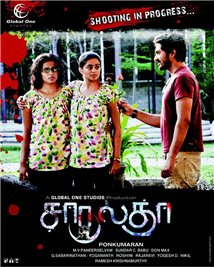