A perfect success tie-up with the prequel A movie's success is based on the director's intellectual. How he unfold the storyline in the style of his own; which people can also enjoy is the success tip. You can say it is just an inch away from the reach of the crease to make this film. When the boys made their century in the last innings, we would expect at least the commendable score. They achieved it! Music is not excellent, but it is making us sit without any diaphragm rupture. Siva is the backbone of this movie, where his beauty of wit, works out very well.Subtle play by Premji is a sigh of relief, others have done their role appreciably. Many scenes are a complete tailor made one where the compromise in laughter is not even a second thought. Good narration! Better making !! Best team work !!! (more)

Super movie , enjoyed a lot . Everyone will enjoy this multistar movie , especially those who liked the first part will surely like this . Great work from Venkat Prabhu . Shiva , Jai , Aravind , Premgi , Vijayalakshmi , ..... performed well . Yuvan's songs and bgm rocked the theaters . Eventhough this movie deals with family of the stars , cricket is the main subject (as seen in the first part of Chennai 28 movie ). This movie also shows us that age is just a number . The stars forgetting their age comes together and plays cricket in awesome manner as they did in the first part . Jai and Sana are the main attraction of the film but others have their own importance throught their movie especially Shiva . Overall this is a superb , entertaining movie for all . Don't miss it . (more)

Entertaining movie with cricket and humour. Credits goes to all the artists who presented innocent reactions on screen. Keen performances on every roles and dialogues. (more)

The movie is a massive sixer from the whole team . I would not like to compare each and everyone's performance but yeah all of them did extremely well . The movie is a mixture of all emotions and Venkat Prabhu delivers with style . The main hero of the movie is non other than Yuvan Shankar Raja himself , What can I say "Pichchi Menjirukaru" . Mind blowing BGM . At first after the songs were released I was not a really big fan of them but with the visuals . My god , Semma treat The other major plus was the comedy . I died laughing Comedy timings were Excellent The movie will keep you laughing till the end . The first half was really quick , which is another major plus point . The 2nd half was also excellent specially with thrills here and there . Overall a really really entertaining film with an excellent story which will make you laugh to the max all covered up by Fantastic BGM and Songs . Kudos to Venkat Prabhu and the whole team (more) 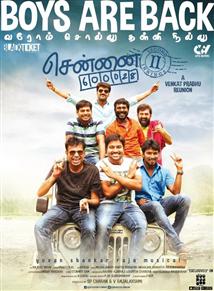