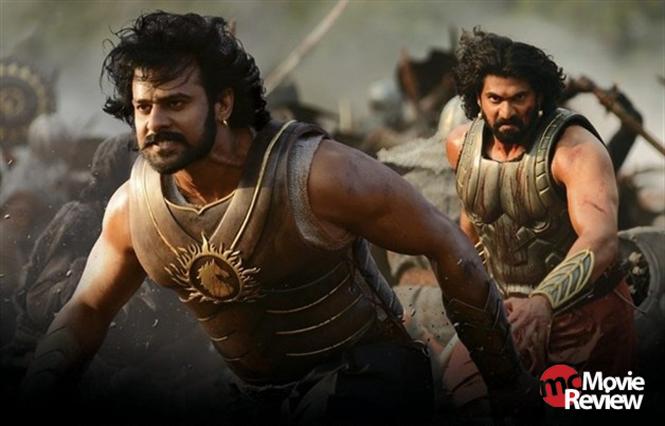 It is not often that regional cinema gets noticed on a national scale. The recent Kaaka Muttai had the national press and social media go gaga over it. Despite being a numero uno director in Telugu Cinema it was ‘Eega’ that became ‘Naan E’ (Tamil) and ‘Makkhi’ (Hindi) that made Rajamouli transcend regional boundaries. His Baahubali has been in the limelight ever since it was announced. With an enormous amount of time, budget and effort that has gone into it’s making will Rajamouli strike again?

It is quite complicated. Not the plot as such but how the maker has tried to reveal only portions in the first installment. In short it is the story of the rise of ‘Baahubali’ into a fearless warrior before he was backstabbed.

Rajamouli has been spot on with his casting. The film looks like a straight Tamil film for the most part. It is only Prabhas who keeps reminding you that certain portions are definitely dubbed. His physique alone would have made Rajamouli be absolutely sure about casting him. So when he carries a huge sivalingam it does not hurt your reasoning that much. Sathyaraj looks the part in a crucial role which might get even bigger in the second installment. Tamanna does look a bit out of place as a female warrior with her petite frame. Nasser and Rana as the scheming villains make the most impression.

The VFX and scale of making were what brought in all this hype about the film. And it definitely seems justified. The waterfalls, the kingdom and the war sequences are the first of it’s kind in Indian cinema with the finesse and authenticity. The grandness simply stands out.

Rajamouli deserves all the credit for venturing out to make a film on such a scale. His films have always had a thin plot and it is the way he presents that makes all the difference. ‘Baahubali – The beginning’ too does not make you sit up with the core theme. Except for a revelation in the climax the film traverses along on expected lines. It is the grandeur that keeps camouflaging this. The first half is built on showing the cruelty of Rana and Nasser. And what you get in the second half is not the revenge of the hero but the backstory of the principal characters. Hence it becomes extremely difficult to judge the film as a standalone product and it might actually not be right to do so. We are made to follow the character of Shiva in the first half and then all the attention turns towards Baahubali. You cannot deny that ‘Kochadaiyan’ comes to mind. That too was about a son avenging the death of his father. Only that in Baahubali you have to wait for the second part to actually see the reciprocation. Nasser being the mastermind in both the films is probably another reason for the déjà vu. The war sequence in the second half is imaginatively done and is one of the highlights of the film. But while the actual war is between two different factions the more important outcome is about the selfish agenda driven motives of Rana. Hence the emotional connect with the on screen grand battle is partly lost.

‘Baahubali- The Beginning’ is definitely a visual extravaganza on screen. But the emotional connect with the audience is a thin line. At the end, your eagerness to see ‘Baahubali – The Conclusion’ is what determines on which side of the line you are in.