Lingaa Review - Rajinikanth is the King

Rajini is back in a full length featured film after 4 Years since Endhiran. Superstar has gone through ups and downs from health and financial perspective during that time period. It is surprising to see that Rajini's charisma is completely intact after a gap.

The story template is no different from many of Rajinikanth's yesteryear big hits from past. The movie is narrated through a long flashback sequence focused on Raja Lingeswaran (Rajinikanth) who builds a dam/reservoir with his own money. The present day Lingaa (Rajinikanth) who is a small time crook goes to the village to save the dam from the villains.

As one would expect, Lingaa is an out and out Rajini movie. Rajini plays the dual role and the director brings out his best through the Raja Lingeshwaran role. Rajini proves that he can still pair up with 2 heroines, makes you laugh with current generation comedians Santhanam/Karunakaran and fights the bad guys on top of a moving train, of course, with help from computer graphics. Rajini makes you sympathize for him in "Unmai Oru naal vellum" and makes you ponder about life with the his philosophical dialogues. That's the magic of Superstar. Albeit a few extra wrinkle lines on his face, Rajini looks young and fit with no paunch.

KS Ravikumar is back to business after 3 consecutive failures.  KS Ravikumar is the only director in Tamil industry who could finish such a big project with Superstar in such a short time period. KS Ravikumar should be credited for tapping Rajini's strengths while downplaying his age-related constraints. KS Ravikumar has scripted based on a contemporary issue related to Mullai Periyar dam and weaved it effectively in a fictitious story spanning across generations. KS Ravikumar's stays safe with his style of storytelling. KS Ravikumar doesn't deviate much from his time-tested emotion evoking scene constructs and his dialogues are crisp and triggers the right emotions.

KS Ravikumar appearing as a cop named "finishing kumar" gives the right finishing touch in his cameo role. The climax is a mere formality with fight sequences in hot air balloons and Mission Impossible skyscraper style stunts. The flashback portion appears lengthy. KS Ravikumar could have shortened the period portions and concentrated more on strengthening the conflicts in the present day

Anushka as a reporter and Sonakshi as village girl in pre-independence portions play their part well. The lead heroines have meaningful roles and provide ample support for Rajini to score. Rajini's timing keep pace with Santhanam's quick one-liners. Karunakaran doesn't have enough lines and screen space. There is a long list of character artists including Vijayakumar, Radha Ravi, Brahmanandam, Sunderrajan, Ilavarasan, Nizhalgal Ravi, etc. who are cast in their usual parts. Jagapathy Babu as the present day villain is loud. It is a relief to see the actors shown as Britishers don't look like tourists picked up from Mahabalipuram. They have acted reasonably well in important scenes.

AR Rahman's background music is mature, unobtrusive and supports the movie's narration. The songs Mona Gasolina is energetically picturized on Rajini and Anushka. En Mannava is a duet with Sonakshi. The songs Unmai Oru Naal and Indiane move the story forward with montages shots. Oh Nanba is an average opening song for Rajini shot at Ferari world.

Cinematographer Ratnavelu has worked hard to show Rajini young. The period portions are lit well and shot in a grand manner. The angles and camera movements help with the narration. The costume designer and make-up artist for Rajini should deserve applause for knocking off Rajini's age. Editing is crisply cut to hide deficiencies in Rajini's dancing and fight scenes. The art director effort should be appreciated for mounting massive dam and selection of a number of historic set design. The computer graphics is subtlely done to not distract the viewers.

If you feel the goodwill of Rajini's onscreen character Lingeshwaran help grow the brand aura of real-life Rajini, you know very well the movie has worked on you. 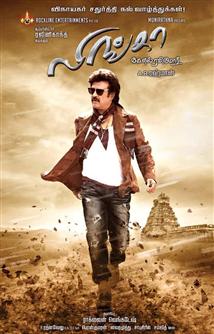