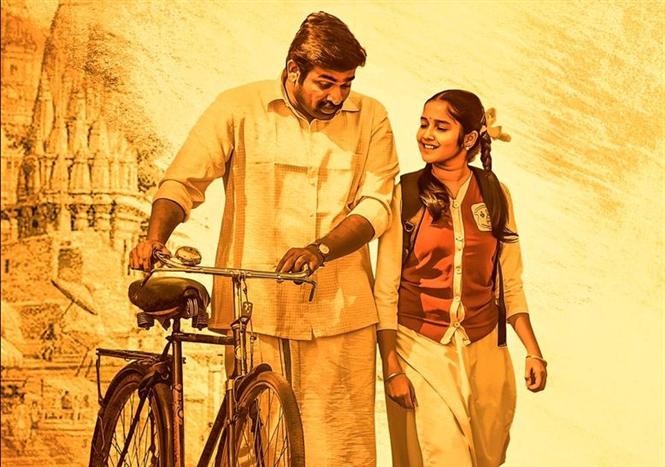 Vijay Sethupathi is an auto driver in Pannapuram village. He is a very trustworthy person in the circle and he steps into the real-estate brokerage business. After a major turnoff incident, he has no way but to run away from his village leaving his family behind. How he resolved all the problems and got back to his native place is the crux of the story.

The life of a great man who struggled a lot and sacrificed everything for his family is narrated. The character arc is totally fine, the place where the film began and the way it ended is a convincing story graph. But the screen-writing is so outdated and the important plot points don’t really fit for what is tried to convey here. Seenu Ramasamy is known for his seamless writing that would look admirably natural, but the factor is completely missing in this film. Unfortunately, the heart and soul is not in its right place, so it was difficult to feel for the characters involved and incidents happening on-screen. A crucial part of the screenplay is very similar to what we saw in Dharmadurai, with respect to money. The flow is extremely slow and sometimes it even makes the viewing so restless. Not only the boring drama, the situations piled up are very random and old-school. The movie lacks depth to a huge extent, even the main subject it deals with, the scenes about real-estate have no clarity whatsoever. Certain portions and emotions are wrongly conveyed as they are made to be laughed at by the audience in the theatres, mainly because the lead character leaves the village with one serious purpose, but doing something clueless in a different place that has no relation to the core plot. The Kerala to Kasi transition is totally needless, the location shift made absolutely zero change to the impact. Except for the initial short flashback sequences which were decent, the film is nowhere engaging enough till the very end. Even the dialogues are poorly penned, such inconsistent and senseless voiceovers.

Vijay Sethupathi missed out to do justice to his role, probably with a better acting his character would’ve been more appealing. Leave out the body language, could easily witness that lazy attitude in his face, he overacts too much in a scene where he cries out loud. On the other hand, Gayathrie and Guru Somasundaram have done their job well by delivering neat performances. But sadly, their roles are written in a half-baked manner and so their presence makes no major impact. In fact none of the characters have powerfully penned on the paper, even there are no good enough elements to elevate the titular character. Ganja Karuppu, Anikha Surendran aren’t necessary at all, they appeared just as fillers to extend the runtime.

The camera work is pretty fine with a lot of steady-cam shots that are apt for the mood of the movie, but the night frames look so dull and overly blacked out. Dharmadurai had such lovely songs, be it a Kuthu number, melody or an emotional track, it was fully packed with beautiful music. Here despite having two musicians, all we get is a disappointing album and the background score doesn’t help the scenes. Just a 2 hours duration is the saving grace, the feeling that the film is running all through the day is unavoidable, but the scenes are sloppy and not complete at most parts. It’s like some of the points are missing and passed on to the next abruptly.

A dry subject that is handled without any sort of finesse in terms of writing and performances, so the story fails to emotionally connect and make us realize the greatness of the lead character that is intended to be presented. A potential soulful flick that lands as quite a boring fair from start to finish.