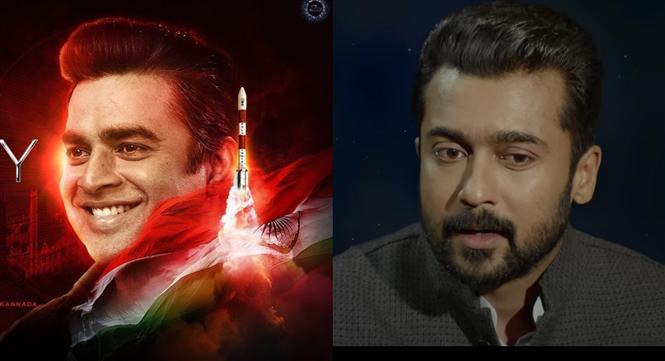 Rocketry: The Nambi Effect starring and directed by Madhavan is an upcoming multilingual movie which is based on the life of Tamil-origin ISRO scientist Nambi Narayanan. Prime Media has announced that it will be releasing the movie in USA in all South Indian languages i.e. Tamil, Telugu, Malayalam and Kannada. Yash Raj Films and Phars Film Co are presenting Rocketry in Hindi, English overseas.

Get ready to witness magic creation of @ActorMadhavan as a director & also as an actor. #SuryaSivakumar @yrf pic.twitter.com/ieKdiboEv4

Suriya plays a cameo in the South versions of Rocketry movie and Madhavan during recent film promotions revealed that the actor 'didn't charge a penny' for his role in the film. Madhavan revealed that Suriya made his own travel arrangements, flew to Mumbai to shoot his portions and Madhavan didn't give him a gift or anything to thank the actor for his gesture.

This revealition by Maddy [as Madhavan is fondly known among South fans], has sparked interest because only recently Suriya turned a lot of heads with his cameo in Kamal Haasan's Vikram. The actor famously charged no money for that movie as well, but Kamal Haasan later gifted one of his expensive, prized possessions to the actor post Vikram's release.

Rocketry: The Nambi Effect is scheduled to release in theaters on July 1, 2022 and also stars Simran, Ravi Raghavendra among others. The film recounts the journey of Nambi Narayanan from a prodigal space engineer and pioneer of liquid fuel rocket technology in India, to being falsely accused of espionage in 1994, legally cleared in 1998 and ending up with an award of Rs. 1.3 Cr. from the Kerala government in 2018.