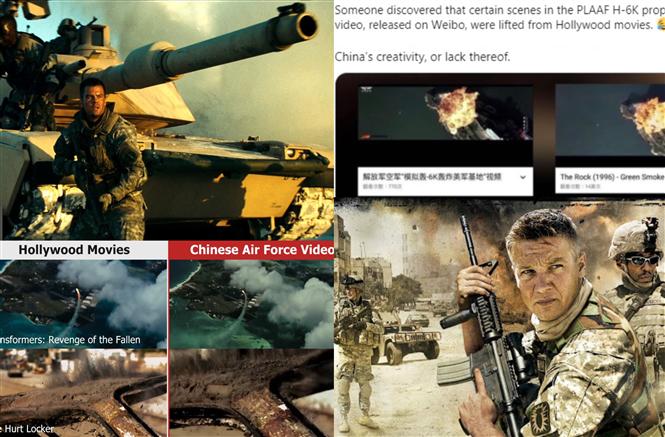 From Quentin Tarantino written, Nicholas Cage starrer to Jeremey Renner's multiple Oscar award winner, movies such as The Rock (1996), Transformers Revenger of the Fallen (2009) and The Hurt Locker (2008) became talk of the town after it was discovered that China's People Liberation Army (PLA) lifted clips from these said movies to put together a PR video showcasing their air-force prowess.

Naturally, it took no time for China to be mocked mercilessly by netizens since the PR video was aimed at threatening USA (video shows Chinese airmen attacking facilities resembling USA's Diego Garcia and Guam), the very country which is also the homeland to Hollywood, the biggest film industry in the world.

Someone discovered that certain scenes in the PLAAF H-6K propaganda video, released on Weibo, were lifted from Hollywood movies. 😂🤣

This speaks volumes about China’s respect for intellectual property as well as China’s creativity, or lack thereof. pic.twitter.com/qCkPiPTvUw

China's military loves Hollywood movies so much so that they edited some scenes for their own PLA progaganda. https://t.co/6k5aIy7Zfz

China is the only country which copies scenes from Hollywood movies to show PLA's training.

Wasn't it the #Bild editor who recently accused #China of not being able to do anything original? He may have had a point. Or as they say in #Germany Es stimmt. #Hollywoodhttps://t.co/aF2yUUegqt

Hurt Locker was a powerful film. Didn't imagine it would make an appearance in #PLA's video.https://t.co/okFqBSCz7S

I remember when the PLA used parts of Top Gun to show off their prowess in a propaganda video back in 2011. This time China's air force used parts of The Hurt Locker and The Rock. Guess they admire America's Hollywood-military complex. From @InkstoneNews: https://t.co/fUoIWzhgrx

All White people's movies look alike to them.