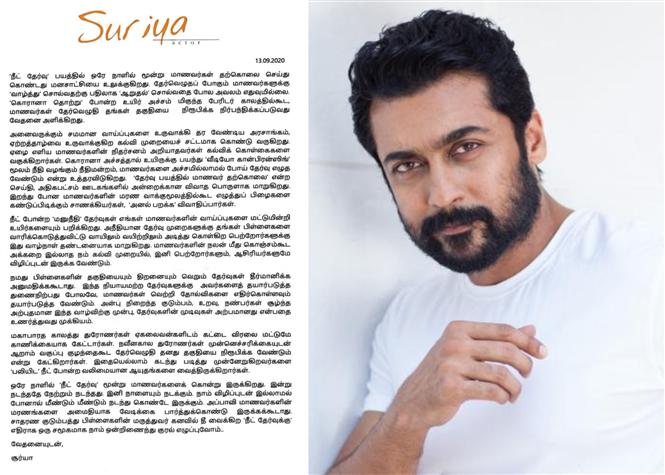 "The suicide of three students on the same day out of fear of NEET examination shakes the conscience. There is nothing as shameful as expressing 'comfort' instead of 'wishes' to students who are going to take the exam. Even in times of great fear for life caused due to the 'Corona pandemic', it is unfortunate to see how students are asked to prove their worth by taking exams.

A government that is responsible for creating equal opportunities for all, is legislating an education system that will bring inequalities. Those who do not understand the reality of poor and underprivileged students are involved in making educational policies. The court, which administers justice through video conferencing because of the corona scare, orders students to go and write exams without fear. News of 'students suicide in fear of exams' becomes the subject of that day's debate in most medias. The 'Chanakyas' who find fault in even the dying declaration of the dead students debate it with much heat.

'Manusmrithi' exams like NEET not only deprive our students of their chances but also their lives. It turns into a lifetime punishment for the parents of students, who give their children up to unfair exam methods and end up beating up their mouth and stomach. Going forward, parents and teachers should should only be more vigilant of our education system which has no concern for the welfare of the students.

Mere marks should not be the yardstick to determine the success or failure of students. Just as we prepare them for these unfair exams, we should also prepare them to face successes and failures. It is important to make them realize that the results of the exams are trivial in front of a this wonderful life surrounded by loving family, relationship, friends.

The 'Dhronacharyas' of the Mahabharata era only asked for a thumb from 'Ekalaivayas' as an offering. The modern-day Dhronacharya precautionarily asks even a sixth-grader to prove his worth by passing an exam. And to sacrifice those who study enduring these, they have powerful weapons like NEET.

In just one day, NEET exam has killed three students. What has happened today, happened yesterday as well. It will happen tomorrow too. If we are not aware, it will keep happening again and again. We must not be silently spectating the deaths of innocent students. We must stand together as one and raise our voices against NEET exam, that burns the medical dream of children from a ordinary families."

NEET, a pen and paper based exam conducted by the National Testing Agency for undergraduate medical aspirants in India concluded on September 13, 2020 after being postponed twice. 85-90% of the 15.97 lakh applied students appeared for the exams in over 3843 exam centers and answered a 180 questions with each carrying 4 marks (wrong answer gets negative 1 mark).

A 50 percentile mark ensures pass in this examination (40 percentile for SC/ST candidates) while entrance to the 66,000 seats in dental and medical colleges are ensured only after combining the marks of 12th examination.