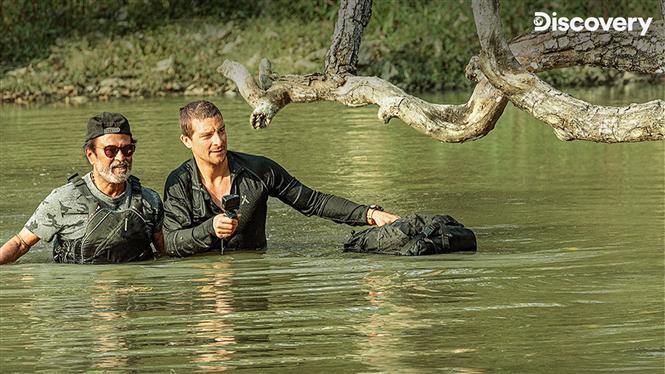 Last night at 8, after a film career spanning four decades, actor Rajinikanth made his international TV debut through Discovery Channel's Man Vs Wild programme. The 70 year old went through a series of physically draining adventures with host Bear Grylls at Karnataka's Bandipur Forest and the hour long episode lived up to every hype that was built leading to the premiere.

Highlights from the show included actors Kamal Haasan, Madhavan and Akshay Kumar making virtual cameos, Rajini crossing a iron bridge 50 foot above ground with just a harness supporting at the hip, Rajinikanth slipping while climbing a slope and bruising his hand (given that the actor is 70 years old with an ailment history, healing is most definitely a cause of concern) and almost giving up but pulling through eventually.

The actor was also seen teaching the host his signature style of wearing glasses and his famous dialogue "En Vali Thani Vali" before the final task of crossing a cold/deep water body to retrieve the crew's cameras.

In India while some viewers caught the episode early on, on Discovery's paid app others stuck to the TV airing and had some thoughts to share.

#ThalaivaOnDiscovery with @BearGrylls #IntoTheWild - Really excited 2 watch how SuperStar @rajinikanth Sir would be adapted 2 @DiscoveryIN channel but vice versa after watched. The Discovery channel adapts 2 #Rajinism with Mass, Fun etc all in his own style. Enjoyed every bit 👍🏼

#Thalaivar @rajinikanth rocked the show on #Discovery 🔥🔥😍
*Inspiration for each & everyone how to do our work with love & dedication at the age 70#ThalaivaOnDiscovery pic.twitter.com/dtT4zUhS7v

Ever cute @ActorMadhavan on @Discovery #beargrylls with #Rajinikanth man vs wild show..

Bear Grylls' closing statement has also become a talking point among the netizens wherein he said, "When you are a superstar, it's easy to say no, and, to stay in your comfort zone. But, you never grow inside your comfort zone. And, the reason he (Rajinikanth) is at the top, is he is always stepping out of the comfort zone..He is tired but he doesn't give up and he is relentlessly positive."