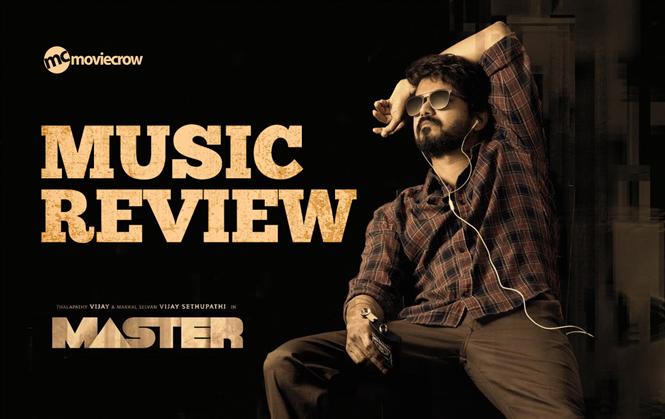 Master is an upcoming action drama film directed by Lokesh Kanagaraj with Vijay and Vijay Sethupath in the lead roles. Anirudh scores music for the film. Though the fact that predominant tracks in the album are sung by the composers itself (surprisingly no female singers) is a bit of dampener, Anirudh ensures that the album is a joyous ride with the highly engaging set of tracks.

Vaathi Coming: Anirudh extends his Marana Mass/Chumma Kizhi structured song and tries to milk its success with the gibberish lyrics threw in by Gana Balachander in Vaathi coming. The hook bit is definitely catchy and easy dance portion but overall it turns out to be a pedestrian listen mainly because of its overused tone especially in the past two albums of Anirudh.

Andha Kanna Paathakka is in lines of Tharam Maara single in terms of tune but Anirudh did exceptional work with an intriguing synth sounds in the arrangements supported by Keba Jeremiah's guitar. Though Vignesh Shivn's lyrics pointed at heroine/ generally female gaze on the protagonist, Anirudh roped in Yuvan Shankar Raja and he delivers adequately. The tune is tailor-made for Anirudh's vocals going by the composer's earlier works.

Kutti Story is easily best of the album with its colloquial lyrics by Arun Raja Kamaraj and Vijay delivering it big time with his casual tone which perfectly suits with the on-screen persona of Vijay. Anirudh kept the tune simple with the catchy rhythm beats and the Tanglish lyrics reminds us of the Anirudh's viral Kolaveri.

Quit Pannuda is a refreshing composition from the composer. The song starts off with a trance-like sound indicating the intoxicated state and turns into a lovely sax solo before plunges into an energetic soft rock towards the second half. The minor quibble with respect to Anirudh vocals aside, the track is a winner definitely.

Polakkattum Para Para starts with Vijay Sethupathi's dialogue and veers into the rustic folk song in the vocals of Santosh Narayanan and the singer easily sails off the tune with occasional thunderous laughs. Anirudh spruces up the arrangements with the consistent use of folk percussions and the tune may blend well with the visuals.

Vaathi Raid: Arivu and Anirudh are in stunning form with Vaathi Raid and the lyrics by Arivu is lit especially the timely usage of Vaathi 'Raid'. The astounding energy with which Arivu delivered deserves special mention and the track definitely matches the vibes Neruppu da created during its release. Arivu's rap forms the backbone of this heady and an exhilarating song.

Bottomline: Anirudh easily delivered his best among his recent outings for the mass films with the vibrant soundtrack led by Vaathi Raid.