Top heroes of Kollywood shine at the Box Office contributing Rs. 1000+ gross in 2019 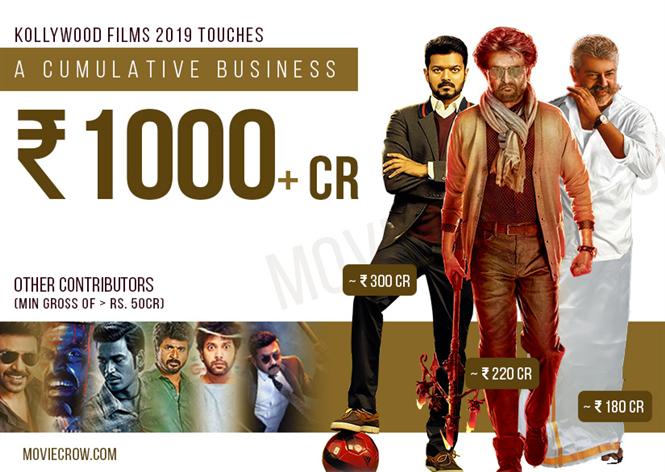 2019 has turned out to be a promising year for Kollywood in terms of box office revenue. The Tamil film industry has witnessed a string of box office hits from all top stars to notable and prominent actors this year. Vijay’s Bigil, Rajikanth’s Petta, Ajith’s Viswasam, Ragava Lawrence’s Kanchana 3, Karthi’s Kaithi are among the top contributors this year.

All top stars like Rajinikanth, Vijay and Ajith have once again proved that they are the biggest crowd pullers and money spinners at the ticket window with ateast one film to their credit. The combined total gross of all these films add up to more than Rs. 1200+ cr excluding the revenue generated through non-theatrical rights.

Suriya had two releases NGK and Kaappaan this year. Kaappaan performed better than NGK and turns out to be a relief for suriya. It is to be noted that the dull/ dry phase at the cinema halls following Saaho’s debacle in TN was revived with the release of Kaappaan which was followed by the release of Siva Karthikeyan’s NVP and Dhanush’s Asuran in the subsequent weeks. Though these films got a window of only one week to prove itself, the content and positive reviews have enabled them to emerge as box office winners.

Dhanush’s Asuran and Karthi’s Kaithi were the surprise winners at the Box Office. Both the films made on a moderate budget have raked in big numbers in all the territories heaping huge profits for all the stakeholders involved.

Most of the notable stars from the film industry have added a feather to their cap this year with the box office success of their films. The individual success of each film has jointly helped the Tamil film industry to flourish which has otherwise been going through ups and downs due to lack of good films while also combating rampant piracy and threat of losing footfalls with the rise of OTT (overthe-top) platforms.

While all the stars have jointly accumulated a revenue of Rs. 1200+ cr in 2019. Superstar Rajinikanth has individually generated a revenue of Rs. 1000+ cr through his films Kaala, 2 PointO and Petta within a span of just 8 months, proving yet again that he is the undisputed king of box office. He is also set to ring in the New Year 2020 with the release of the much-awaited biggie 'Darbar' directed by A. R. Murugadoss.

With just a month left for the year to end, Dhanush’s ‘ENPT’, Siva Karthikeyan’s ‘Hero’ and Karthi’s ‘Thambi’ are lined up for release this year. Hope these actors continue their success streak generating more revenue at the ticket window and conclude the year on a merrier note for the Tamil film industry.